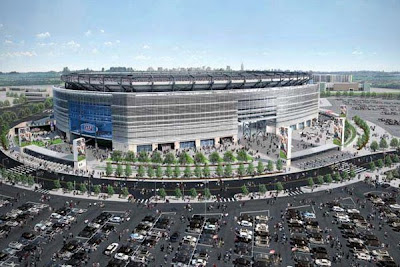 The possibility that New Jersey will play host to Super Bowl XLVIII in 2014 gained traction over the weekend. On Friday, Arizona announced that they would no longer be applying to host the Super Bowl that year, leaving New Jersey, South Florida and Tampa as the remaining three finalists.
In conjunction, a Senate Resolution sponsored by New Jersey Senate Republican Leader Tom Kean encouraging the NFL to select New Jersey as the site of Super Bowl XLVIII is under consideration by the Senate Economic Growth Committee and is scheduled for a vote at their next hearing.
"These latest developments are very encouraging for football fans across the region who have yet to see a Super Bowl played in the Northeast," Kean stated. "With the opening of a new stadium, and the backdrop of New Jersey and New York City, Super Bowl XLVIII has the potential to be a very special game. I remain optimistic that the NFL will realize this unique opportunity and select the new Meadowlands Stadium (pictured above) as their venue to host the Super Bowl in 2014."
The winning bid is expected to be announced during the owners’ meetings in Dallas at the end of May.
Posted by Dan Cirucci at 8:58 AM