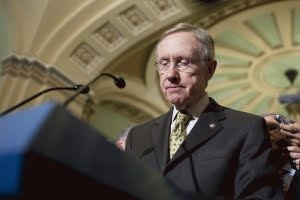 It's come to this.
Cranky old Harry Reid has now weighed in on the continuing dustup between the Obama Administration, the Congress and the United States Supreme Court.
But before we get to Harry, let's talk about one of the few class acts left in Washington: Supreme Court Chief Justice John Roberts.
The Chief Justice said Tuesday that the scene at President Obama's January 28 State of the Union address was "very troubling" and the annual speech has "degenerated to a political pep rally."
You remember the State of the Union.
That's when Obama chided the court, with the justices seated before him in their black robes, for its decision on a campaign finance case.
Responding to a University of Alabama law student's question yesterday, Chief Justice Roberts said anyone was free to criticize the court, and some have an obligation to do so because of their positions but "there is the issue of the setting, the circumstances and the decorum."
"The image of having the members of one branch of government standing up, literally surrounding the Supreme Court, cheering and hollering while the court — according to the requirements of protocol — has to sit there expressionless, I think is very troubling."
Roberts told the students he wonders whether justices should attend the speeches.
"I'm not sure why we're there," said Roberts, a Republican nominee who joined the court in 2005.
Now, back to Reid.
It would have been nice if Roberts' was the last word on the subject.
After all, that is customary in such matters.
But that's not the way the Chicago-style White House and Reid/Pelosi Congress operate in the Age of Obama.
So, today Reid castigated Roberts as being out of touch and completely detached from political reality.
It was the typical Vegas-style sucker punch from Reid -- a man who doesn't trouble himself with facts or rational arguments.
"Do you think John Roberts knows or cares how people get elected?" he said, referring to the role the chief justice played in crafting the court's Citizens United decision.
Insisting that the court was engaged in "activism" for allowing corporations to spend unlimited amounts of money on congressional campaigns, Reid said that the time had come to stop appointing judges to the bench.
"I think we've had enough of them," he said. "I think what we need are people on that bench who have been legislators, people who are lawyers, people who are academics. You look at our Supreme Court and all these people, all they know is working with people in black robes. We have got to change that."
Roberts, out of touch?
What about Reid?
Who's Reid in touch with?
And what makes Reid think "academics" would be in touch with typical Americans?
Harry Reid has pretty much spent his whole life in Washington. His constituents in Nevada don't see him very much of him and, at the rate things are going, they don't care to see him. Reid's poll numbers at home are abysmal.
And Reid sure as hell isn't in touch with the American people. Just look at the way he rammed Obamacare through the Senate over the objections of ordinary Americans. And look at the way he continues to try to shove this massive government takeover down our throats even after Scott Brown's upset win in Massachusetts.
Harry Reid doesn't know what he's talking about.
He prattles on about putting lawyers on the Supreme Court bench. Well, every member of the court is a lawyer.
The truth is that President Obama's attack on the United States Supreme Court (in the presence of six justices) was presumptuous, beyond brazen and shockingly disrespectful.
But don't take my word for it. Listen to what professor Randy Barnett at Georgetown University Law Center said as quoted at Politico:
In the history of the State of the Union has any President ever called out the Supreme Court by name, and egged on the Congress to jeer a Supreme Court decision, while the Justices were seated politely before him surrounded by hundreds Congressmen?
To call upon the Congress to countermand (somehow) by statute a constitutional decision, indeed a decision applying the First Amendment? What can this possibly accomplish besides alienating Justice Kennedy who wrote the opinion being attacked.
Contrary to what we heard during the last administration, the Court may certainly be the object of presidential criticism without posing any threat to its independence. But this was a truly shocking lack of decorum and disrespect towards the Supreme Court for which an apology is in order. A new tone indeed.
But we all know that no apology will be forthcoming.
Not from Obama.
Not from Reid.
Not from anybody who's in charge at the White House or on capitol hill.
No wonder Justice Clarence Thomas has stopped attending State of the Union addresses.
Next time around, damned few representatives of the high court may chose to be on hand to hear the president.
And who can blame them?
Posted by Dan Cirucci at 5:07 PM

Reid's comments were stupid, for sure. And I agree that a State of the Union Address is not the place for the President to criticize the Supreme Court.

But Reid and Obama are right on two fronts:

1. As much as the Republicans cry about judicial activism, the campaign finance ruling was also judicial activism. Is this OK as long as it is activism for conservative causes? And it wasn't like there was no precedent to support the other side; the ruling overturned several legal precedents going back decades.

2. The ruling does hurt elections in this country. As you yourself have said (and I agree with you), we need more independent elected leaders who aren't products of the establishment. But if corporations and labor unions are allowed to spend whatever they want on political advertising, it's going to make it even harder for independent, grass roots candidates to compete. Even if they have an outstanding message, if they don't get in cahoots with corporations, labor unions or other interests groups, they won't be able to afford to make their message heard.

The fact that a contested Senate election in a rural state like South Dakota can cost over $30 million (as the '04 Daschle-Thune race did) shows how much money talks in politics.

Actually, Ronald Reagan criticized Supreme Court decisions in his State of the Union addresses, as have other prior presidents. better check your facts.

Please read Clarence Thomas' explanation of why corporate limits were passed in the first place. http://www.nytimes.com/2010/02/04/us/politics/04scotus.html