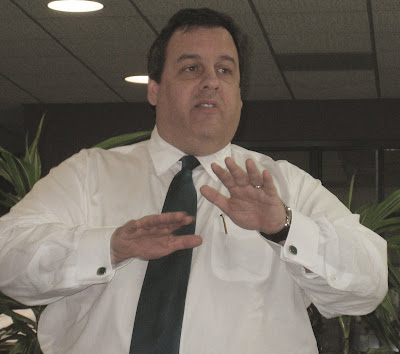 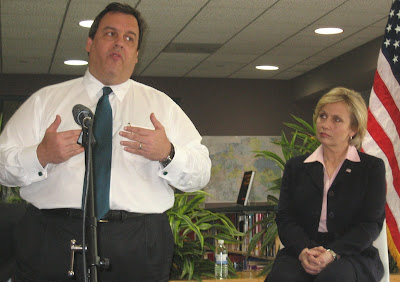 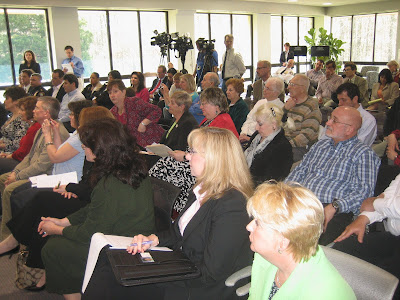 "I don't think you elected me for my matinee idol looks or my charm," Governor Chris Christie told a large crowd at the Mt, Laurel Public Library in South Jersey yesterday.
And then New Jersey's new governor added: "I think you elected a couple of former prosecutors as governor and lieutenant governor to turn things upside down in Trenton and clean up the mess."
And that's exactly what Christie says he intends to do.
Joined by Lt. Governor Kim Guadagno, Christie noted that both he and Guadagno have young children. "So, we care about education and we care about the future of our state," he explained. "And this job keeps you away from your kids more than you'd like. When my kids ask me someday why I wasn't there, I don't want to have to tell them that it was simply because I wanted to get my portrait on a wall in the State House with a brass plate under it. I took this job to do something, not to be something."
Christie told the crowd that, for New Jersey, "the day of reckoning is now."
"We have the second highest income tax in the nation; the second highest sales tax in the nation; the 16th highest business tax and the highest property tax," Christie explained. "We don't have a revenue problem in this state. We've got a taxing problem. And I'm not going to raise taxes just so government can continue to spend."
The Governor said the state must slash expenditures and he called for pension reform, civil service reform and local spending caps that would limit spending increases by municipalities to 2.5% per year. The cap would require an amendment to the state's constitution that would have to be approved by the state's voters in November.
Christie said that Massachusetts imposed such a cap 30 years ago and went from being one of the top five states in the nation in terms of property taxes to number 33 among the 50 states. "It can be done," Christie said.
But the Governor saved some of his keenest observations for the New Jersey Education Association (NJEA), the state's teacher's union. "They get about $730 in dues from each one of their more than 185,000 full time members," Christie said. "Do the math: It comes to more than
$100 million every year. Except for the State House, they've got the largest building in Trenton. They have a mighty big two-by-four to go after anybody who sticks his neck out to criticize them. And now that neck is mine."
But the Governor said he is undeterred.
He says it's wrong for the teachers to keep getting salary increases year after year while not contributing to their medical plans and reaping the benefits of a generous state pension.
He cited the Marlborough School District in Monmouth County where he says teachers closed the deal on a five year contract that gives them a 4.5% salary increase every year while maintaining a non-contributory health care plan.
"They say I want to cut education funding," Christie noted. "But this isn't about kids and education. It's about two classes of citizens: Those who get automatic salary increases and generous benefits for life and those who pay for it."
Christie said that government at every level must stop growing, stop spending and hold itself accountable to strict budgetary principals.
He pointed out that last year, during the worst recession in decades, local towns and municipalities across the state hired 11,3000 additional employees.
Meanwhile, over the past 20 years the state budget has increased 322%.
Now Christie and Guadagno have inherited a $10.7 billion budget deficit.
"This has got to stop," Christie concluded.
Posted by Dan Cirucci at 6:07 AM