Back Where She Belongs, In Philly? Oh, YEAH! 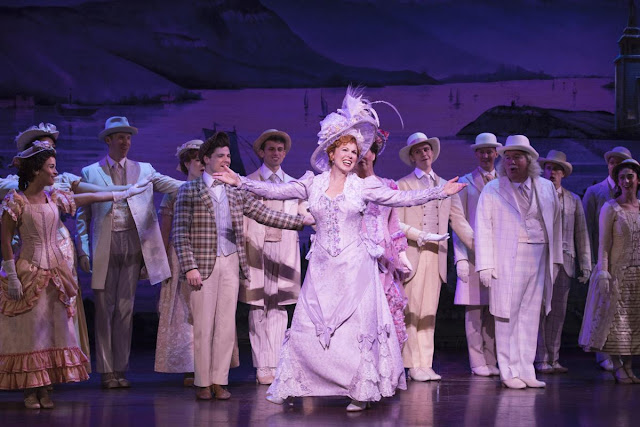 Let's just begin by saying that something grand and wonderful is happening at the Academy of Music in Philadelphia as part of the Broadway at the Academy series. It's the current revival of Hello Dolly! with Carolee Carmello in the title role and damned if it isn't one of the best productions of Dolly we've ever seen -- and we've seen this show with the legendary original, Carol Channing and with Bette Midler on Broadway.

The story of Dolly Gallagher Levi takes place at the turn of the turn of the century in 1890s New York. But its origins date all the way back to an Austrian play written in 1835 which eventually morphed into the 1938 Thornton Wilder play, The Matchmaker and then later in this 1964 musical. The emergence of Dolly is a story in itself, inasmuch as Dolly was only a minor character in the 1835 play. It was Thornton Wilder who moved the story to New York and eventually built the whole play around Dolly.


And therein lies the magic of this perennial favorite. Because Dolly herself is timeless. The heart and soul of this inimitable character is also ageless and universal. So, she's right at home here in Philly because she's genuine -- totally without pretense.

Dolly understands the human condition and that understanding helps her turn events her way. But when she "puts her hand in" matters (as she explains it) she does it not as a cynical manipulator but as a self-appointed benefactor who wants to see people get as much enjoyment as they can out of every moment. And thanks the wonderful cast of this new Dolly, all this is accomplished seamlessly and with no small amount of comic caricature as the show is played broadly, milking every comic line, gesture and pause along the way.
Of course, this classic American musical is richly blessed with good bones.

The book by Michael Stewart moves along solidly with all the right turns and trappings at all the right moments. The music and lyrics by Jerry Herman give us a bounty of show stoppers, ballads and even newly-inserted numbers (like Penny in My Pocket) that demonstrate time and again why this is Broadway gold. The direction by Jerry Zaks manages to be both faithful and inventive and snappy, no small feat when you consider the nature of the project. The choreography by Warren Carlyle pays homage to Gower Champion but is so fresh and alive, it makes you yearn for more and more dancing on Broadway right now. And the scenic and costume design by Santo Loquasto evokes a glorious American era in hues and flourishes that you will never forget.

Dolly has a cast of 37 with a full orchestra and the grandest, most spectacular numbers you'll see anywhere. From the rousing Put on You Sunday Clothes to the breathless Before The Parade Passes By to the catchy Dancing, to the comic Elegance and the lushly romantic Ribbons Down My Back, Dolly never fails to deliver.

But of course, it's the near manic title number that brings down the house. Yes, when Dolly begins to walk down those steps into the Harmonia Gardens, we see once again that you don't need pyrotechnics or special effects to electrify an audience, even in 2020. Coming on the heels of the ingenious Waiters' Gallop (a classic of choreography) the Hello, Dolly! number lasts nearly seven minutes and it's heaven all the way. And when it's over the audience is still literally screaming and crying for more.

If Hello Dolly! isn't Broadway's greatest musical, it's hard to imagine what is.

Don't miss this production, now through March 1.
Posted by Dan Cirucci at 4:25 PM