How Dare They Dishonor This Great American Hero?

The New Jersey Senate passed a bill this week that would honor suffragist Alice Paul with a statue in Washington, D.C 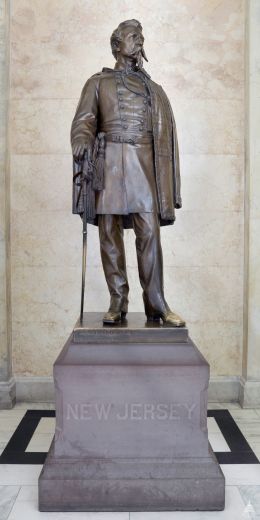 “Alice Paul was a fantastic leader in the campaign to pass the 19th amendment and allow women to vote,” Pennacchio said. “Our nation and our democracy is stronger, thanks to her vision and tenacity. She deserves every accolade we can give her.

“It troubles me that to memorialize her place in history, we feel the need to tear down the honor of another hero, a veteran who made the ultimate sacrifice,” Pennacchio added.

The bill would formally request the Joint Committee on the Library of Congress to approve the replacement of Kearny’s likeness in the National Statuary Hall Collection at the United States Capitol.

On the Senate floor Monday, Pennacchio spoke against the bill for its mistreatment of Kearny, namesake of the Newark suburb in Hudson County.

“Major General Kearny was a decorated war hero in the Mexican-American War and was destined to become a top general in the Union Army when he was killed on the Civil War battlefield,” Pennacchio said. “This courageous soldier lost his arm in the Mexican war, and returned to the battlefield when the Civil War broke out. Removing his statue is disgracing the honor of a fallen hero who helped change the course of American history.”

The National Statuary Hall Collection was established in 1864. Each state is entitled to display two statues, and New Jersey has been represented by images of Kearny and Richard Stockton.

Pennacchio noted that since the Senate vote, residents and leaders of the town of Kearny have expressed concern and anger.

“They aren’t happy about it, and I don’t blame them,” said Pennacchio. “We don’t discard our heroes.”

Kearny was a valiant hero in the 1800s who made his mark in several key battles during the Mexican-American War, losing his arm in the battle of Churubusco. In spite of the severe injury, he continued to serve until the end of the war when he retired and moved to France.

When he thought he could help in the Civil War, Kearny returned to the U.S. and to the Army. He was eventually commissioned Brigadier General and assigned command of the New Jersey Brigade stationed in Virginia. A fierce and effective leader, Confederate soldiers referred to him as “The One-Armed Devil.”
Posted by Dan Cirucci at 1:51 PM