Bloomberg VS Trump: The REAL Differences 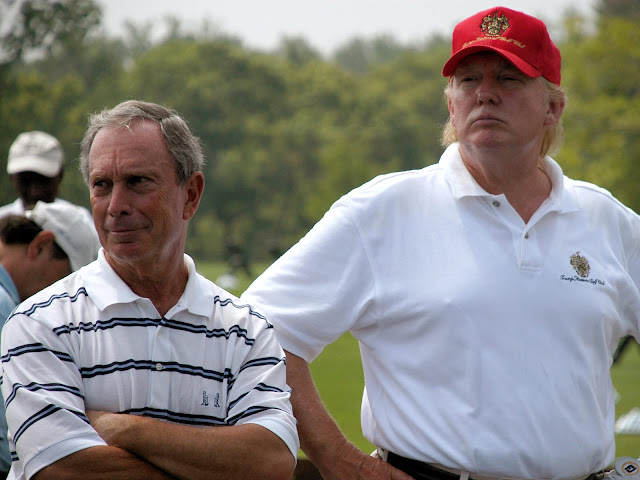 Elizabeth Warren maintains that a choice between Trump and Bloomberg would amount to choosing between two "arrogant billionaires."
Well, they're both billionaires -- that much is true. And neither man is known for his humility, that's for sure. Plus, both have been very successful in business, both are New Yorkers, both have been married and divorced and both have an eye for the ladies.
But, don't be fooled. The contrast between these two billionaires could not be more stark. Here are five big dividing lines between Bloomberg and Trump -- differences that will drastically impact the election should they go up against one another:

1) Branding
Both men have successful enterprises that bear their name. But in the case of Trump, he is the brand. Though Mike's operation is called "Bloomberg" he is not now nor has he ever been the face of the company. Bloomberg has largely worked behind the scenes. Not so with The Donald. In fact,  you cannot separate the Trump Organization from Donald Trump. This is powerful stuff. Donald Trump's face is recognized all over the world by people of all ages. In fact, he's just attracted a crowd of more than 125,000 in India! Could Bloomberg do that?

2) Sales and Marketing
Donald Trump is a natural-born salesman. In fact, not since Ronald Reagan has America had such a consummate salesperson/president. Trump can sell pretty much anything to anybody. As for Bloomberg, when it comes to sales and marketing, well -- he has people for that. In the realm of huckstering, Bloomberg is out of his league. No contest!

3) Personality
Did you watch Bloomberg during that presidential debate last week? No discernible personality! Bloomberg is beige. Trump is bright red (like his tie) or vivid blue (like his suit) or luminous orange (like the rest of him). There's nothing neutral abut Donald Trump.

4) Public vs private
What do we really know about Michael Bloomberg? Damned little! Where was he born? What was his wife's name? Does he have children and, if so, how many? What's the name of the woman he now lives with? Much of the Bloomberg persona is shrouded in mystery because Bloomberg wants it that way. Bloomberg's a cautious and analytical sort of guy who's been thrust into the spotlight but still guards his privacy. Not so with Trump. In fact, what don't we know about Donald Trump? It's all right out there -- his whole life is a messy but nonetheless open book.

5) Upbringing
Bloomberg's father was a bookkeeper and Bloomberg trained as an electrical engineer and received his MBA before going to work as a stockbroker. Trump's father was a real estate mogul and builder and Trump parlayed that into a vast real estate-hospitality-entertainment empire becoming a TV star, major media presence and political leader along the way. As successful as Bloomberg has been, his story pales next to Trump's dazzling roller coaster ride to the top. Bloomberg seems at home in the world of algorithms. Trump seems at home almost anywhere.

To wrap this up, just look at the two men's signatures. That'll tell you a lot: