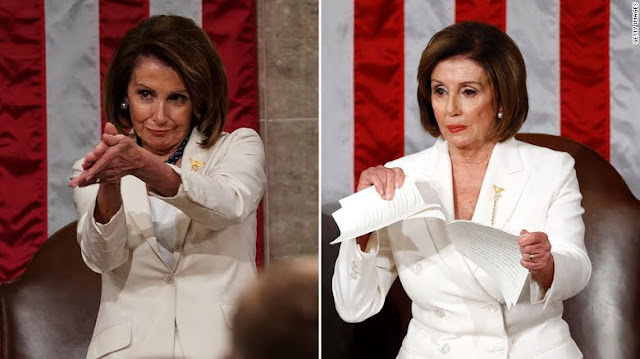 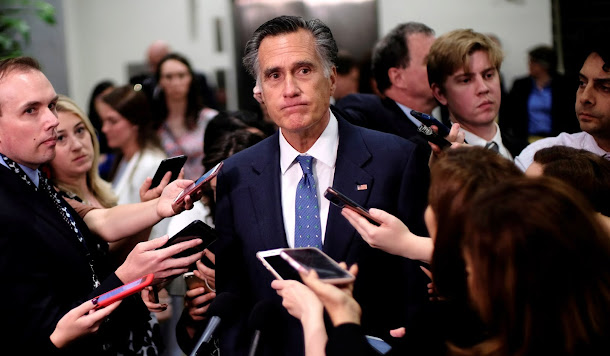 We don't enjoy having to comment on the recent antics of Mitt Romney and Nancy Pelosi.
Honestly, we really don't. Not one bit.
And we certainly don't enjoy pairing them like this. After all, few social media outlets campaigned harder for Mitt Romney in 2012 than the blog you are reading right now. In fact, we were right there at the Republican National Convention in Tampa, rallying for Romney every minute and right up through election day as we remained stalwart for Mitt.
Furthermore, as many of you may know we're very proud of our Italian-American heritage so it hardly cheers us to disparage Nancy D'Alessandro Pelosi, much as we find her politics reprehensible.
But we can't ignore the way these two self-possessed, petulant personalities have behaved over the past few days.
In both cases their antics were carefully planned and calculated. And both clearly designed their plans of attack with a view toward gaining the maximum attention and holding the spotlight as long as possible.
Romney sent signals that he might betray Trump and the Republicans well in advance. And he made a point of anguishing over the whole process. It was so bad that you wanted to shout: "Oh, grow up, Mitt. Grow up, shut up and do your job!" Did he really think he was a Senate of One?
Candidly, in the case of Romney we think this is all a play for the John F. Kennedy Profile in Courage Award which is annually bestowed by Caroline Kennedy, usually on a liberal icon or occasionally on a conservative deserter. We're betting Romney garners the award this year. For him, it will be  one of many badly-needed consolation prizes that he simply has to assuage his ego and nurse his wounds from his disastrous 2012 campaign.
Here's a guy who entered a race that was his to lose. He had everything going for him. And he promptly played it safe and proceeded to squander a sterling chance to reclaim the White House. The saddest part was that he blew it all not with a bellicose assault but with a pitiful whimper.
Now Romney wants us to see him as some kind of tortured truth-bearer who has staked his whole career on this one moment. But Romney had little to lose because he really doesn't amount to much anymore.
We'll say this much for also-rans like Al Gore and Bob Dole -- they had the good sense to step aside after their defeats. Ever the good soldier, Bob Dole (a certified American patriot) remained loyal to the GOP and even defied never-Trumpers by stepping forward in 2016 to extol candidate Trump and help the cause. As for Gore, he refused to relive the 2000 presidential race and instead found a new cause and charted a new direction, advancing the climate change issue.
We're sorry but we're not buying Romney's heart-on-the-sleeve protestations about his deep faith, his restlessness and his conversations with the Almighty. This vote wasn't about faith, it was about the law, the Constitution and the facts. Render unto God what is God's and unto Caesar what is Caesar's.
And then we have Pelosi -- a lesson in smarminess and hypocrisy if ever there was one.
First she laid out the strong case against impeachment, protesting that such a move would have to be clear, definitive and bipartisan otherwise it would not be credible. But then she did a complete reversal and abandoned all of her previously professed convictions.
In the process she painted a callow portrait of capriciousness. This is why President Trump tagged her "a nervous wreck." He saw right to the core of this insecure and imperious pretender. And he exposed her for what she is: a power-hungry swamp denizen.
Trump has an uncanny ability to identify any challenger's erroneous zone and go for the jugular. This rattled Nancy and she fell into the President's trap. Unable to escape, she decided to play the only card she had left: a crass and cranky play for attention. So unhinged was she that she seemed to forget how her antics would play on the grand stage. Yes, her huge hunger for self-aggrandizement blinded her to the ramifications of her actions.
So, she dove into the impeachment morass and was promptly overwhelmed by it all.
Finally, her self-invented demise unfolded with countless little cuts as she carefully made small tears in a copy of the President's State of the Union address in preparation le grande déchiqueter, the symbolic destruction of Trumpism and all it represents.
Because she never really paid any attention to the words in Trump's speech or the people in the gallery that he was introducing or how his credible and impactful his message was or how it was being perceived, her Big Stunt landed with a thud.
Even now, she can't understand what happened. She doesn't know why people can't see that she had to do this to demonstrate how right she is and  how justified she was in making a mess of things.
You have to wonder how people like Romney and Pelosi can reach such heights and still remain so clueless.
But we shouldn't be surprised, should we? Sadly, there are more than a few people like this in positions of power. And who among us hasn't worked for or had to answer to a self-indulgent jerk at one time or another?
Posted by Dan Cirucci at 5:37 PM