What The Hell IS It With Iowa And NH Anyway? 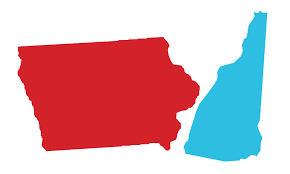 And I suppose you could defend these two small states and all the attention they receive on the grounds that they force the candidates to be up close and personal and engage in old-fashioned retail politics.

But, neither one of these primary contests have held my attention for quite some time.

True, as a college student I did campaign on foot for Gene McCarthy in New Hampshire in 1968 and that was a great thrill. Mind you, this was way, way before cell phones and sophisticated apps. We worked dawn to dusk, knocking on hundreds of doors and sleeping on gymnasium floors wherever and whenever we could. Just from our experiences over a few days (we had to get back to classes at Villanova University) I could tell that something Really Big was about to happen in New Hampshire. And, indeed, McCarthey's strong showing there forced President Johnson to forego a bid for election in his own right that year. Now, that was history.

But that was the exception rather than the norm. Plus, McCarthey never went on to become the nominee and often these two states do not foretell the eventual outcome of the race.

Anyway, here's what I wrote (right here on this blog) about Iowa and New Hampshire in 2007:

I've been meaning to say this for awhile.
To hell with Iowa and New Hampshire. I don't give a damn about these two small, insignificant white bread states and their caucuses/primary.
If you can explain the Iowa caucuses to me then you're smarter than anybody who's running. Because the candidates themselves don't even understand the Iowa caucuses. From what I understand it will be a Big Deal if 125,000 people participate in the Democrat caucuses. That's not very many people -- in fact, not many more than all of the people who reside in the town that I call home. And as for New Hampshire, many of the people there who take great pride in their so-called "independent spirit" are just plain cranky old kooks. Neither Iowa nor New Hampshire is any any way representative of the rest of the country. So, the views of the people in these two states are skewed.
What's more, I find it nothing less than obscene that we are being subjected to a windy, endless political campaign during Christmas week. It's disgusting.
And I blame the media and the candidates themselves for all this. How sad that the gassy, windy punditocrity can't shut up for even a few days. And how pahhhhthetic that these egotistical, power-driven politicians are so insatiable that they can't give us a break.
On top of it all I nominate Bill and Hill as the poster boy and gal for this shameful spectacle.
Just look at them as the scurry around at yuletide looking for votes. When is enough, enough?