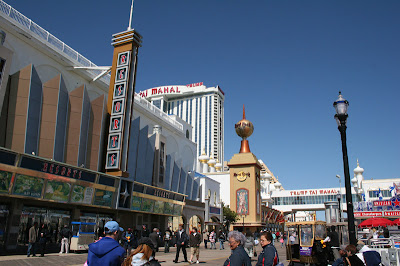 We took a v-e-r-y l-o-n-g walk on the world-famous Atlantic City boardwalk yesterday.
The weather was chillier than we had expected. In fact, it was at least 10 degrees cooler there than it was in Philadelphia. But it was humid in Atlantic City as well.
The local media had pumped up the whole downashore hype as the media do every year at this time. So, the crowds were out in Atlantic City.
Some observations:
1) We've been walking the boardwalk in Atlantic City for many years. We've seen a lot over the years. A lot.
Today, if you wanted to be kind you would say that the Atlantic City boardwalk is like a United Nations. You will hear all tongues spoken as you find your way from the Inlet to Chelsea. Of course, if we wanted to be less generous we would say that the Atlantic City boardwalk today is a bit like a third world country.
No matter, they all still come to Atlantic City and they all still seek sun, sand and fun. And for the most part, they find it. Or so it seems.
2) There are a lot of little shops along the boardwalk but they all sell the same thing: junk. They're cluttered with cheap junk: tee shirts, souvenirs, bad food, flashy beach wear, etc. They are like miniature temples to bad taste, one after another. Thank goodness for the pier at Caesars and the outlet center.
3) The scent of the Atlantic City boardwalk is distinctive. We don't know how to describe it but it is changeless, constant. It's a mixture of mist, salt air, old dried wood, cotton candy, popcorn, cheesesteaks and goodness knows what else. You know it when you smell it.
4) The boardwalk is in a constant state of repair. It boggles the mind just to think about what it must take to keep the boardwalk in a walkable state. All things considered, it's amazing that it looks so good.
We will note that the outlet shops and the pier at Caesars were quite crowded. People were lined up outside the Coach store waiting to get in. There must have been some sort of special clearance taking place there. We can't say that we saw that many people with shopping bags but people were nonetheless checking out the merchandise.
They were out there. They were shopping.
Posted by Dan Cirucci at 7:40 AM