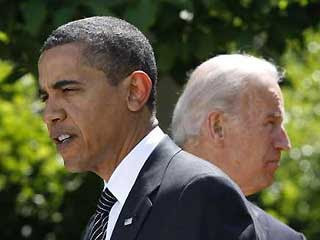 Acording to a soon-to-be-published book President Obama and Vice President Joe Biden are at odds.
Obama is distracted and irritated by Biden's "jokes" and constant yapping. Obama feels that such behavior is undisciplined. On the other hand, Biden seems to have no idea what all the fuss is about.
Here's the story from Fox News:
President Obama is so "distracted by his vice president's indiscipline" that he has been forced to rebuke privately Vice President Joe Biden, according to a new book by Newsweek journalist Richard Wolffe, who interviewed Obama a dozen times.
"He can't keep his mouth shut," Wolffe quotes a "senior Obama aide" as saying of the gaffe-prone Biden in "Renegade: The Making of a President," set for release June 2.
As evidence, Wolffe reports that during the presidential transition period, Biden insulted Valerie Jarrett, one of Obama's closest friends and confidantes. Jarrett had been considered Obama's top choice to fill his vacated Senate seat in Illinois, but took herself out of the running just hours after Illinois Gov. Rod Blagojevich allegedly told a wiretapped conference call he would not heed any Obama recommendation without a payoff.
"Soon after Jarrett pulled out of consideration for the Senate seat, the senior transition team met to discuss Cabinet picks," Wolffe writes.
"Biden tried to compliment Jarrett after one contribution. 'You should be in the Senate,' he quipped. After the meeting, as everyone returned to their offices, Obama stopped Biden to warn him not to say anything like that again. 'It's not funny,' he told him."
Posted by Dan Cirucci at 2:20 PM