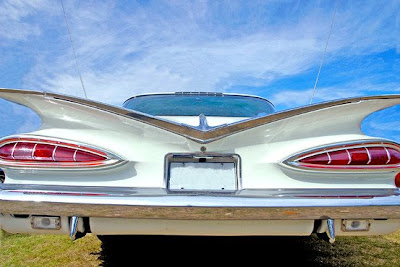 What killed the American automobile industry?
You killed it. All of you who bought Japanese cars killed it.
The romance between you and the automobile died when you succumbed to the fiction that Japanese cars were more efficient.
You traded style and romance for box cars, some jerryrigged measure of "customer satisfaction" and resale value.
You gave up on the idea of a car being more than a mode of transportation.
You embraced the notion that you needed to be practical, mundane, beige.
But someone has said all this much better than I.

From P. J. O'Rourke in the Wall Street Journal:
The phrase “bankrupt General Motors,” which we expect to hear uttered on Monday, leaves Americans my age in economic shock. The words are as melodramatic as “Mom’s nude photos.” And, indeed, if we want to understand what doomed the American automobile, we should give up on economics and turn to melodrama. Politicians, journalists, financial analysts and other purveyors of banality have been looking at cars as if a convertible were a business. Fire the MBAs and hire a poet. The fate of Detroit isn’t a matter of financial crisis, foreign competition, corporate greed, union intransigence, energy costs or measuring the shoe size of the footprints in the carbon. It’s a tragic romance—unleashed passions, titanic clashes, lost love and wild horses. . . .
And there’s the end of the American automobile industry. When it comes to dull, practical, ugly things that bore and annoy me, Japanese things cost less and the cup holders are more conveniently located. The American automobile is—that is, was—never a product of Japanese-style industrialism. America’s steel, coal, beer, beaver pelts and PCs may have come from our business plutocracy, but American cars have been manufactured mostly by romantic fools. David Buick, Ransom E. Olds, Louis Chevrolet, Robert and Louis Hupp of the Hupmobile, the Dodge brothers, the Studebaker brothers, the Packard brothers, the Duesenberg brothers, Charles W. Nash, E. L. Cord, John North Willys, Preston Tucker and William H. Murphy, whose Cadillac cars were designed by the young Henry Ford, all went broke making cars. The man who founded General Motors in 1908, William Crapo (really) Durant, went broke twice. Henry Ford, of course, did not go broke, nor was he a romantic, but judging by his opinions he certainly was a fool.
Among certain youths—often first-generation Americans—there remains a vestigial fondness for Chevelle low-riders or Honda “tuners.” The pointy-headed busybodies have yet to enfold these youngsters in the iron-clad conformity of cultural diversity’s embrace. Soon the kids will be expressing their creative energy in a more constructive way, planting bok choy in community gardens and decorating homeless shelters with murals of Che.