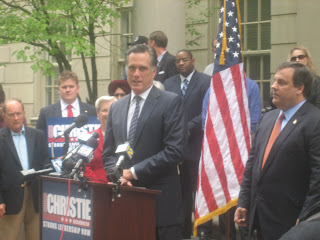 Former Massachusetts Governor Mitt Romney has endorsed Christopher Christie for governor of New Jersey.
The endorsement came this morning here in South Jersey on the steps of Haddonfield Borough Hall in the picturesque historic town that serves as a model for communities throughout the state.
Christie was beaming with pride. The former federal prosecutor has the look and feel of a winner.
Romney was personable and carried himself with a presidential bearing as he vigorously endorsed and praised Christie before a crowd of town resident led by Haddonfield's extraordinary Mayor Tish Columbi.
Romney praised Christie’s conservative values, his commitment to bringing jobs back to New Jersey and his promise to restore fiscal balance by reigning in out-of-control spending.
“I’m convinced the challenges facing New Jersey and the rest of the country can be overcome with courageous leadership. Chris Christie is a strong conservative voice for balanced budgets, low taxes and more jobs. He will bring badly-needed change to state government,” said Romney.
“By electing Chris Christie, the people of New Jersey will be taking a giant step toward a brighter and more prosperous future,” Romney added.
Romney's Free and Strong America PAC supports officeholders and candidates who are dedicated to advancing social, fiscal and foreign policies that will strengthen America. The guiding focus is on the core principles that have built and nurtured America since its founding – uncompromised military strength, an emphasis on strong families, a federalist approach to government that leaves decision-making as close to the people as possible and a belief in the power of free markets and that a competitive America is one where taxes are low and government is small.
This is a big, big boost for Christie in his campaign to unseat New Jersey's wacky Governor Jon Corzine. Romney is well-positioned to lead the Republican Party (and pssibly the nation) into the future.

I am voting for Steve Lonegan and I won't support these hacks supporting the other phony candidate with no plan and a bunch of platitudes.

I respect and welcome your view.
But be careful: Mitt Romney has worked hard all his life for the Republican Party. Governor Romney has traveled all over the country supporting Republican candidates. He has been a tireless leader, fund-raiser and campaigner for the GOP. His Republican credentials are impeccable and he probably garnered more conservative votes in the '08 presidential primaries than other single candidate.
The GOP must come out of this election united so that Corzine can be ousted.
Careful, careful what you say and how you say it!