Bullock In The Proposal 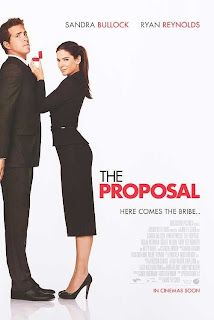 Last night we attended an advance preview of the new Sandra Bullock romantic comedy, The Proposal.
Here's the synopsis: A pushy boss forces her young assistant to marry her in order to keep her Visa status in the U.S. and avoid deportation to Canada.
It sort of reminded us of the 1990 comedy, Green Card. Here's the synopsis of Green Card: A man wanting to stay in the US enters into a marriage of convenience, but it turns into more than that.
So, The Proposal has the element of a pushy female boss.
Does that sound romantic to you?
And Green Card richly benefited from the presence of Gerard Depardieu and Andie MacDowell (ravishingly beautiful) in the starring roles. To that you could add Bebe Neuwirth.
The Proposal has Bullock, the boyishly charming Ryan Reynolds, Craig T. Nelson, Mary Steenburgen and Betty White hamming it up as an eccentric Alaskan grandmom.
For all that talent The Proposal doesn't quite make it.
This is another one of those "fish out of water" movies. This time Sandra Bullock (also the executive producer of the film) gets transplanted from Manhattan to Alaska. In a similar comedic turn earlier this year Renee Zellweger was transplanted from Miami to Wisconsin. That movie (with Harry Connick, Jr.) was called New In Town and it didn't last very long in theaters either.
Hollywood just can't seem to make zany romantic comedies anymore.
Why?
I think it's because we've become too jaded. We're ultra-critical and can no longer tolerate a story that's implausible unless it's science fiction, an all-out action flick or shamelessly vulgar and juvenile.
We're cynics now and that doesn't leave much room for finesse, for subtlety, for smooth sophistication within an obviously fictitious plot.
The Proposal does have its moments. The timing in some of the scenes is just this side of perfect. And Bullock and Reynolds make for a very seductive team. They're great fun to watch. Plus, there's something refreshing about an older, shapely woman with a younger man.
It's light summer fare.
But at the current cost of admission, we have a right to expect more from a major studio Hollywood flick.
Opening June 19 from Touchstone Pictures.
Posted by Dan Cirucci at 6:51 PM

Thank you for your summary of the movie, my girlfriend wanted to drag me along to see it dispite my arugments, the female wins.

Bullock was almost too believable as an uptight city girl in this movie, I dare say