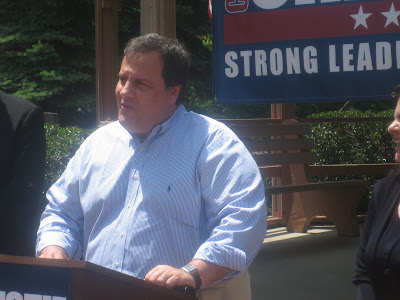 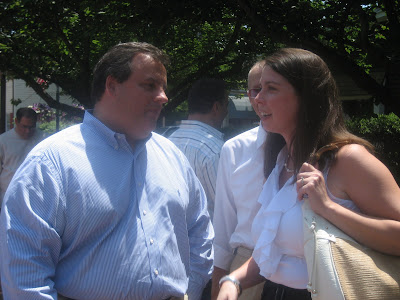 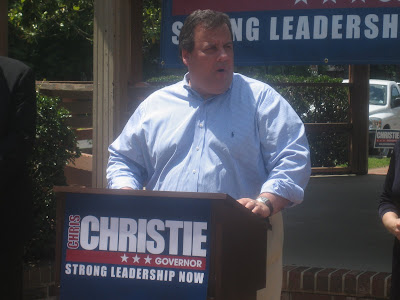 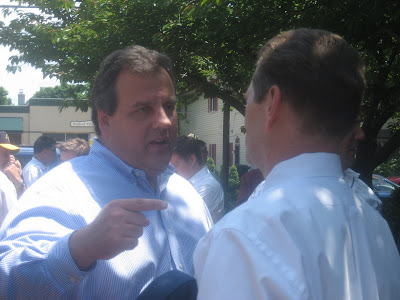 We spent part of the day Saturday with New Jersey gubernatorial candidate Chris Christie during a campaign stop in nearby Medford.
Here's what we can tell you about the man who appears to be well-positioned to be the next Governor of the Garden State: Chris Christie is his own person. He arrives without an entourage or a lot of trappings. His message is clear and he gets right to the point: New Jersey is broke and he's the man to fix it. We have to get our house in order. It won't be easy. But it must begin with cuts in state spending and tax cuts for all.
And we've got to end New Jersey's culture of corruption. When Chris talks about ending corruption he speaks from experience. No prosecutor in recent memory has put more corrupt politicians in jail than this guy.
He's a one-man cleaning crew: a smart, tireless, dedicated champion of justice.
Chris Christie is exceptionally personable. Unlike our present socially-challenged Governor, Chris Christie is not awkward around people. In fact, he's a people person. He chats easily with everyone and is quick with a smile or a joke. He's confident without being the least bit cocky or presumptuous. He's very human and takes time with each person that he meets.
Chris Christie knows how to be serious without being dour or droll.
He understands that you can learn something new from almost everyone so he really listens to people.
Chris Christie never underestimates the intelligence of his audience and we get the feeling he wouldn't even know how to begin to feign smugness.
We like Chris Christie. He's refreshing.
The vibes that we get from him are sound, positive.
Our instinct tells us he's the right person at the right place at the right time.
He can and should be the next Governor of New Jersey.
But none of this will happen easily or quickly.
If Chris is to be our next governor, you and I must vote for him on June 2 - one week from Tuesday.
This may be New Jersey's last chance. Vote Chris Christie!
Posted by Dan Cirucci at 4:46 PM

Chris Christie had no position on anything when he did a NJN interview in December. Since then he used focus groups to change what he says to sound good. Your ensorsement has platitudes but no substance. Lower taxes for everyone and end corruption ... by hiring his buddies as overseers to look over the shoulder of the regulators. Lonegan just want to cut these people to begin with rather tha hiring more to look over their shoulder.

On the other hand, Steve Lonegan wrote a book in 2007 that lays out his plans, Putting Taxpayers First. The flat tax stops the outward migration of high earners to stop the yearly shortfalls. The redistribution of school funding and vouchers to reduce the property tax and the elimination of business taxes which will reduce the price of everything.

You won't find evidence of Christie being one thing or another because he has no plan or convictions, he says what he thinks the voters want to hear. He claims he wants to continue the rebates and reduce everybody's income tax. However, the rebates come from the income tax so that cannot possibly work.

Instead of listening to bunch of endorsements and political hacks who want the gravy train to continue, look at the Lonegan plan.

Chris Christie is running a positive, results-oriented campaign.
He's a doer. He gets things done.
Go to his website and you will see his detailed plans.
New Jersey doesn't need a zealot or a preacher. We need someone to fix our state with tough ethical standards, efficient government and low taxes.
The other guy talks and talks and runs and runs and runs but he's yet to win statewide office. He keeps losing.
Corzine won't be easy to beat.
We need a winner to take back our state.
His name is Christie.
BTW: I don't answer to any political bosses anywhere and I own them nothing. I'm for Christie for the reasons I've explained. He's tough, smart, independent, ready to govern, period.

South Jersey is the Pitts when it comes to corruption. We have no choice and no chance for any opportunities that are worth anything. This is a well oiled machine that has been operating for decades upon decades and no one has tampered with it. The long list of money padding pensions, all in the family Jobs and people who are evil, cruel and vile. They hae no ethics and should be under a microscrope for the fraud, corruptions, lies and multiple cover ups that are going on in this state. Norcross is their Sugar Daddy and he protects them. This guy should have been locked up and put away years ago. I can not understand how this ingrate slipped through the system without a conviction. This show how screwed up our laws are in the state. He really needs a highlighter and bars in front of his face. Then they need to go after Crooked Legislators who have broken the law in South Jersey. It is shameful

Your observations have merit. South Jersey does need a good cleaning.
And yes, there is more than enough corruption to go around.
The print media (Courier, Inquirer) should have done more in the way of investigative journalism and providing editorial leadership to try to arouse a largely disengaged public.
Remember: New Jersey has no statewide newspaper and no independent, statewide TV station.
Still, one thing's for sure: When it comes to putting corrupt politicos in jail, no one has a better record than Chris Christie - and no one has been as fearless.