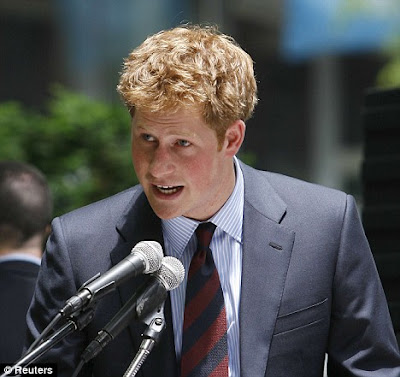 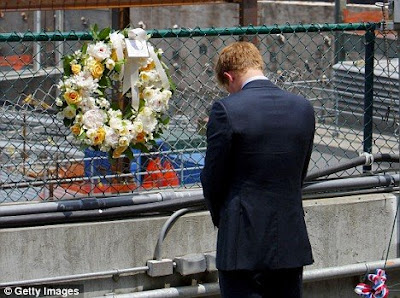 From Britain's Daily Mail:
Prince Harry paid tribute [Friday] to the 3,000 victims of the September 11 attacks, laying a wreath at Ground Zero in New York.
In a sombre start to his two-day visit of the city, Harry bowed his head and observed a minute's silence after placing the memorial on the fence where the World Trade Centre once stood.
He was then taken on a brief tour of the construction site before meeting firefighters from a nearby station who were involved in the rescue attempt.
The wreath, made up of yellow roses and peonies, carried a personal message signed by the visiting royal.
It read: 'In respectful memory of those who lost their lives on September 11, 2001, and in admiration of the courage shown by the people of this great city on that day.' . . .
Before laying the wreath on the wire fence, he spoke to families of those killed in the attack.
Speaking before his arrival, Monica Iken, a 39-year-old New Yorker who lost her husband Michael in the atrocity, said it was fantastic Harry was making the effort to attend the site.
She said: 'It is great he wanted to come here and show that people still care, and it shows respect to our loved one that died on that day.'
As many Americans forget September 11 or suppress the memories of that day, Prince Harry remembers.
Prince Harry perpetuates the memory of those who were lost and those who acted so courageously and he also reminds us of the remarkable friendship between the people of our two nations and the enduring alliance that sustains us. Britain is our most treasured ally. And Prince Harry represents the sound continuation of this alliance into new generations.
Thank you, Harry for remembering!
Posted by Dan Cirucci at 8:59 AM