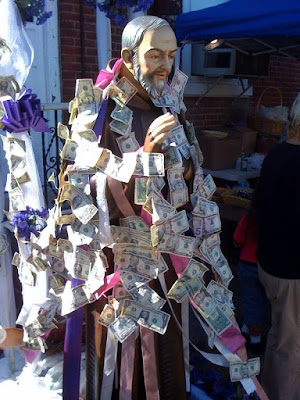 Yesterday was a beautiful day and we needed an old-fashioned South Philly Fix.
So, we headed over to 10th and Dickinson to the Annunciation BVM Church's Annual Saint Padro Pio Festival.
Saint Padre Pio (1887 - 1968), was a Capuchin priest from Italy who is venerated as a saint in the Roman Catholic Church. He was born Francesco Forgione, and given the name Pio when he joined the Capuchins; he was popularly known as Padre Pio after his ordination to the priesthood. He became famous for his stigmata and for numerous miracles and healing that were attributed to him.
Beginning in 1990, the Congregation for the Causes of Saints debated how heroically Padre Pio had lived his life, and in 1997 Pope John Paul II declared him venerable. A discussion of the effects of his life on others followed, including the cure of an Italian woman, Consiglia de Martino, which had been associated with Padre Pio's intercession. In 1999, on the advice of the Congregation, John Paul II declared Padre Pio blessed.
After further consideration of Padre Pio's virtues and ability to do good even after his death, including discussion of another healing attributed to his intercession, the Pope declared Padre Pio a saint on June 16, 2002. Three hundred thousand people were estimated to have attended the canonization ceremony.
Well, the Padre Pio Festival yesterday was a grand affair with many happy attendees of all ages.
We lit a candle in the Padre's honor and followed the old Italian custom of pinning money to ribbons that adorn the saint's statue. This is part of venerating the saint and giving back to the church.
I grew up accustomed to veneration of the saints and it is a practice that I continue to treasure.
Saint Anthony is my patron saint and Saint Jude, Saint Francis, Saint Augustine, Saint Thomas Aquinas and Saint Joseph remain among my favorites.
Padre Pio is a source of great inspiration -- a beacon of light amidst so much evil in the world.
I might add that the Capuchin Franciscans have been very good to me over the years and were there at a critical point in my life when I very much needed them.
I never have -- and never will -- forget this.
Of course, while we were at the festival we supported the many vendors on hand and dined on penne pasta with meatballs, fresh cooked artichokes and delicious cannolis.
What a joy it was to sit in the golden sunlight on a little street in South Philly and savor the heart-warming sights, sounds and scents of an old-fashioned Italian street festival. Bella!

Photo of Saint Padre Pio statue by Mark Tarasiewicz.
Posted by Dan Cirucci at 8:07 AM