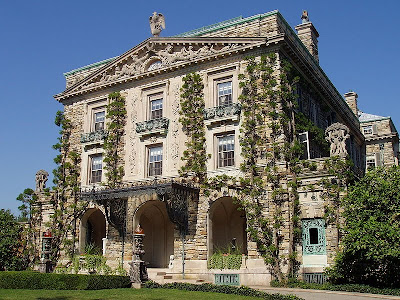 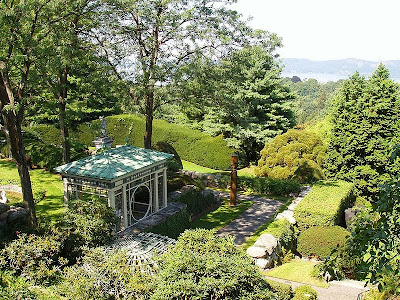 Kukuit means "lookout" or "high point."
And Kykuit certainly is the high point of our visit to the beautiful Hudson River Valley.
Supremely situated in Pocantico Hills, Kykuit enjoys a commanding view of the Hudson and the Palisades. It's breathtaking!
Kykuit, also known as John D. Rockefeller Estate, is a 40-room National Trust house in Westchester County, New York, built by the oil businessman, philanthropist and founder of the prominent Rockefeller family, John D. Rockefeller (Senior), and his son, John D. Rockefeller Jr (Junior), enriched with art collected by a third-generation family member, the Governor of New York and Vice-President of the United States, Nelson A. Rockefeller. It has been the home to four generations of the family.
We drove through the charming village of Sleepy Hollow to get to Kykuit.
Then, after a stop at the visitor's center, we boarded a special mini bus that took us up to the vast Rockefeller estate. Originally 400 acres, the estate eventually came to encompass 4,000 lush acres overlooking Hudson Valley river towns and the river itself. Though the Hudson is three miles away from the top of the estate, it looks like you can simply reach out and touch the water which glistens as it meets the sky beyond.
At this time of year, between the estate and the water one sees nothing but green -- treetops.
Perfect weather made our visit to Kykuit absolutely dreamy.
And the mansion and the surrounding gardens and grounds are filled with priceless works of art including a vast modern art collection assembled by Nelson Rockefeller. Miro, Picasso, Calder, Motherwell and Warhol are among the many artists represented The modern collection features sculptures which are placed throughout the grounds.
The entire effect is nothing less than staggering.
As you stand amidst this civilized wonderland of nature, art and elegant living, it's hard to believe that you are only a short drive from the city.
Mark this one down as a "must see."
Visit Kykuit at least once before you die!
Posted by Dan Cirucci at 3:41 PM