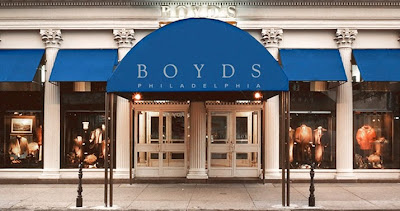 The autumn party season is in full swing in the city and on Thursday we attended one of the biggest and best parties of the year -- the Fall FashionFest at Boyds celebrating the opening of the store's new women's department on the third floor at 1818 Chestnut.
We enjoyed wonderful white cosmo martinis made with Pravda vodka and delicious treats from Raw, the cafe at Boyds. These included shrimp wrapped in bacon, thin-sliced steak rolls, a variety of sushi, batter-dipped chicken and other delights.
Live models provided the visual stimulation (along with the many guests all of who were instructed to "dress fashionably") and DJs kept the whole environment reverberating.
Of course we saw many friends such as former Philadelphia Bar Association Chancellors Allan Gordon of Kolsby Gordon (there with his wife, Sharon) and Alan Feldman of Feldman Shepherd. Feldman was there with his partners, Carol Nelson Shepherd and Roberta (Bobbi) Pichini. We also chatted with our dear friend lawyer Theresa (Terri) Italiano who is now Legislative Director for Philadelphia City Council and with the great Nicole Cashman whose Cashman and Associates produced the entire evening for Boyds. And let's not forget Rob Kaloustian, General Sales Manager for 1210 AM Radio, The Big Talker in Philadelphia and Johnny Corrado of Morgan Stanley's Corrado Group.
Seventy years ago, Boyds opened its doors with a relentless commitment to providing customers with the best of the best. Today, in its third generation, Boyds is regarded as one of the world's great clothing stores.
While Boyds has grown and evolved, its core ideals have remained unchanged. There are no demographic breakdowns and no shareholders to answer to. Its customers are not points on a graph. Boyds one store. The same one that has been owned and operated by the same family for 70 years. And when you know customers by their names and individual tastes, demographics just seem silly.
In an age of mass merchandising, when so many retail stores look the same, Boyds focuses on providing our customers with exclusive merchandise. They are proud to offer one of the country's largest selections of fine men's and women's designer fashions.
Boyds is known for extraordinary customer service. Free custom alterations by fifty European tailors, fashion coordinators and free valet parking are part of Boyds tradition.
Posted by Dan Cirucci at 7:52 AM

i'm glad to have visited your blog and good to know you! I find it interesting and informative