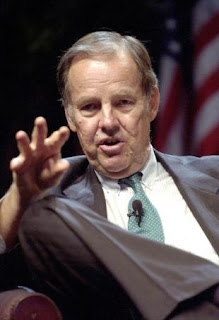 Former New Jersey Governor Tom Kean thinks the state's voters are savvy and "notoriously independent."
And despite Governor Jon Corzine's negative attacks on Chris Christie, Kean feels that negative ads won't necessarily convince New Jersey voters who he says "look beyond party."
Kean made his comments during a news conference today arranged by the Christie campaign.
"I managed to be elected twice without going negative," Kean said.
"I think the people want to hear about the issues. They're waiting to hear something positive from the Governor. Let him defend his record. Let him say what he plans to do. The public is looking for positive planning," Kean added.
When I asked Kean about the apparent tendency of New Jersey voters to close strong for the Democrats, he pointed to the fact that the state's voters did vote for him, for Governor Christie Whitman, for President Ronald Reagan and for President George H. W. Bush. "The people of New Jersey have common sense. They will vote for the candidate," he said.
Still, Kean warned that it's a long way from here to election day and the race "could change either way." While Christie maintains a double-digit lead, Kean cautioned that "you can't say it's going to be double-digits or single digits or whatever."
Asked about the Democrats' recent attempt to drive up Christie's negative numbers by pointing out that he once received a speeding ticket, Kean responded: "A traffic ticket is not what I had in mind in terms of issues. A lot of people get traffic tickets."
The former Governor said the economy is the main issue in New Jersey, and more specifically jobs.
"This is what the people are worried about. We can't continue to lose jobs at the current rate," he said. "We're lagging behind neighboring states."
"We've got to keep good jobs in the state," he added. Kean pointed out that people are fleeing New Jersey. "That's not good. That's not good for our economy. We need change."
Posted by Dan Cirucci at 12:01 PM