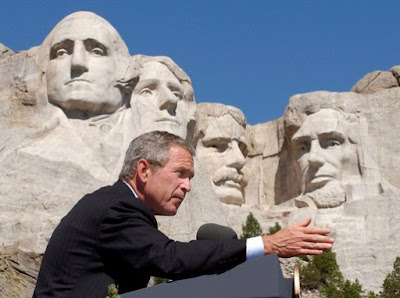 So, I've been watching Ken Burns' extraordinary documentary, The National Parks, America's Best Idea on PBS and I'm struck by the fact that Republican legislators and Republican Presidents paved the way for the creation of our national park system in the first place.
Indeed, Republicans have done more than many others to preserve and protect millions of acres of wilderness, national treasures and places of true antiquity.
And Democrats will probably never equal this record of achievement.
Three Republican Presidents -- Lincoln, Harrison and Grant signed the first pieces of legislation to preserve precious lands as state and national parks. These first preservations were Yosemite and Yellowstone. And it was a Republican Senator from Iowa -- John F. Lacey -- who spearheded the drive for the protection of so many additional acres and national monuments. Lacey was a true hero.
And, of course, that great Republican President Theodore Roosevelt was the veritable founder of the modern conservation movement and preserved more acreage than anyone -- often with just the stroke of a pen.
So many of the treasures that we enjoy today are there because of the courageous actions of Republicans.
Of course, you'd never know this from the Burns documentary since when the word "Republican" actually is spoken it's often linked to greedy, moneyed interests.
Well, Burns is an avowed liberal Democrat.
No matter. We know the truth.
And Burns' documentary is a spellbinding, visual joy nonetheless.
BTW: Ever notice that two of the four Presidents depicted on Mt. Rushmore are Republicans while only one can (nominally) be called a Democrat?
Posted by Dan Cirucci at 6:07 AM

I think the National Forests and all of Nature should be preserved, especially in areas where the building has gone out of control. We need some trees and "green" stuff around...or we will go totally mad.