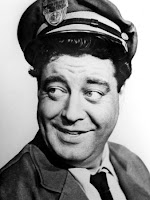 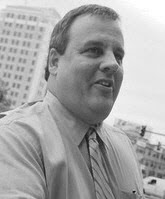 Here's the deal: If New Jersey Governor Chris Christie is going to become a national star, then we've got to start thinking of him in terms of the great national stars -- the great icons -- that we've known and loved.
We've already noted Chris Christie's resemblance to actor Oliver Platt.
That's in the present.
But what about the legendary stars of the past?
Well, Christie often reminds us of the original "Great One," Jackie Gleason.
Governor Christie assumes the "everyman" cloak just as well as Gleason did when Gleason played bus driver Ralph Kramden on the legendary "Honeymooners" TV series. And Christie can seem as frustrated as Kramden when he has to deal with some of the clueless Democrat legislators in Trenton. In fact, we can almost hear Christie belting: "One of these days... One of these days... POW! Right in the kisser!"
But Christie could also be another Gleason character, Joe The Bartender. That's because the Governor has proved to be a very good listener. He really seems to listen to and understand the concerns of ordinary people. And this common touch gives him a keen insight into what's on people's minds. That's a vital asset for any successful politician.
We must admit that we've never been able to fit Christie into the role of another famous Gleason creation, The Poor Soul. Up to this point, the Governor has rarely engendered sympathy or pity. He seems much too proud for that. You get the sense that Christie would leave the stage before he ever got to that point.
Finally, there's Reginald Van Gleason III, the wealthy top-hated snob who lives amidst a world of mansions and servants. Could Cristie be tempted by such heights of fame, fortune and unbridled power? Perish the thought! If that ever happened he'd cease to be Chris Christie. And that would rob us all of one of New Jersey's most vivid and memorable personalities.
Posted by Dan Cirucci at 8:52 AM