Chris Christie's Next Career: The Movies? 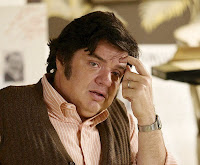 Could it be that New Jersey Governor Chris Christie will find his next career in the movies?
Stranger things have happened.
Look at Chris Christie (left) and movie star Oliver Platt (right). No one would ever confuse Platt with Matt Damon, Leonardo DiCaprio or Brad Pitt. But Platt has snagged quite a few choice roles and built a thriving career on stage, TV and in the movies.
Like Platt, Christie is funny, gregarious, entertaining and, some might even say charismatic.
From Newark and Trenton to Hollywood and Beverly Hills?
Well, it wouldn't be the first time it ever happened.
But for now, let's give Christie a chance to carry out his ambitious agenda in Trenton first.
Posted by Dan Cirucci at 10:18 AM