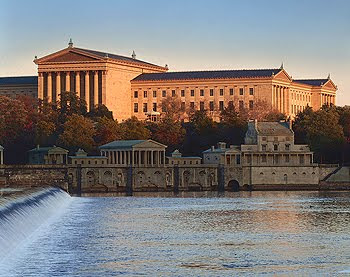 I recently had a chance to chat with the Philadelphia Museum of Art's new Director and CEO Timothy Rub and I can report that exciting events are underway at the museum. And, the year ahead and beyond promises even more blockbuster exhibitions and intriguing attractions.
Timothy Rub brings many talents to his new role and I'm convinced he is well on his way to becoming a great asset to the city and to the art world. He possesses an impressive knowledge of art and artists, great enthusiasm and the ability to grow the museum and bring it into a dynamic new era.
My interview with Rub is part of a Philadelphia Bar Association podcast that you can listen to by clicking here.
You will enjoy this quick interview which previews many of the upcoming attractions at the museum.
Many of the upcoming Museum attractions focus on Italy and/or Italian artists. Here are some of the highlights that you and I can look forward to:
Water Works - Modern and contemporary art in which water is the main theme; 5/15 - 7/18/ 2010.
Late Renoir - Focusing on the final three decades of the great Pierre-Auguste Renoir. This will be a blockbuster. 6/17 - 9/6 2010.
To Love, Honor and Obey? - Italian Renaissance marriage chests; through 7/3/2010.
Hanging Around - Modern and contemporary lighting; 7/17 - 10/10/2010.
Eakins' "The Gross Clinic" Restored - The nineteenth century masterpiece as you've never seen it; 7/24 - 1/9/2011.
Picturing the West - Yokohama Prints from the 1800s; September - November, 2010.
Eakins on Paper - Celebrating the 150th anniversary of the Philadelphia Sketch Club; September - December 2010.
Desert Jewels - North African Jewelry; 9/4 - 12/2010.
Mark Cohen: Strange Evidence - Contemporary street photography; Fall 2010.
Michaelangelo Pistoletto: From One to Many - One of Europe's most influential living artists showcased with more than 100 works. 11/2/10 - 1/16/11.
Alessi: Ethical and Radical - Focusing on the influential Italian design house and its "house-hold objects." 11/21/10 - 4/10/11.
George Innes in Italy - Ten oil paintings from the pioneer of Tonalism. February - May, 2011.
Marc Chagall: Paris Through the Window - Chagall and his friends in Paris. March - July, 2011.
Roberto Capucci - An wide-ranging survey of the works of the widely-admired Italian fashion designer and artist ; 3/16 - 6/5/2011.
Rembrandt and the Face of Jesus - More than 50 related paintings, prints and drawings from the great Dutch master. August - October 2011.
Van Gogh Up Close - A blockbuster exhibition including 45 paintings from the great impressionist in a show organized by curators Joseph Rishel and Jennifer Thompson. January - May 2010.
Posted by Dan Cirucci at 3:36 PM