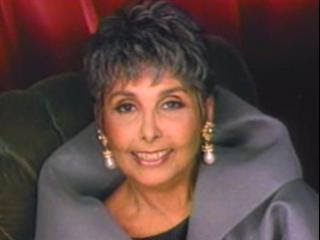 The Legendary Lena is gone.
Lena who exuded class and grace and wit and elegance and good old-fashioned moxie.
Lena, the Lady and Her Music -- the lady who did as much for American popular song as Duke Ellington or Ethel Waters or Nat King Cole or Louis Armstrong.
Lena, the headstrong lady who kept her head high, refused to compromise, fought the good fight for freedom and dignity and emerged towering over it all not just as a survivor but as a universal touchstone for personal pride, personal best, and remarkable perseverance in the face of injustice and adversity.
Her name itself came to embody the sort of perfection in a performer that is all too rare: Lena Horne.
She was more than one of the most beautiful women in the world.
She was more than a great singer and incredibly versatile entertainer.
She was more than a great American and a universal icon.
She was a self-sustained force of nature who inspired millions.
And rightfully, she lived to see herself become part of Black history and part of American history.
Lena Horne was the first black performer to be signed to a long-term contract by a major Hollywood studio.
Way back in 1939 the great New York Times drama critic Brooks Atkinson first noticed her on stage in a Broadway revue and called her "a radiantly beautiful sepia girl." Radiantly beautiful she was. But she was no girl. Lena was a lady - always a lady, even when she fought like a tigress.
Movie critic Pauline Kael called her "ravishing" and noted that when she sang in a movie "you can forget the rest of the picture."
Lena was coffee with cream and that's the way Hollywood and pre-civil rights America liked it. But the real Lena was more espresso than latte.
And in the second half of her life the deeper, more resonant, richer, more expressive Lena began to emerge. And the world took that Lena to its heart.
The real catalyst for all this was the 1981 Broadway show, Lena Horne:The Lady And Her Music which ran for 14 months on Broadway and garnered rave reviews and a Tony Award. The show, which then toured around the world, was a talking, singing, performing biography that included two versions of Lena's biggest hit, Stormy Weather. The first version was the smooth, sultry, early-Lena version, cool and collected. The second version (at the end of the show) was the all-out, soulful, full-throttle late-Lena version, defiant, daring and unapologetic.
These two sides of Lena embodied not just the two sides of Black America but also the two sides that all of us have and that all of us know we have: our public and our private personas; our prepared and proper side and our more uninhibited, wilder, raw side.
Lena knew about both sides and she wasn't afraid of either side.
I'm so proud to say that I saw Lena, live in concert three times.
Each time was a magical, unforgettable evening.
Late in her life, Lena looked back and said this: “My identity is very clear to me now. I am a black woman. I’m free. I no longer have to be a ‘credit.’ I don’t have to be a symbol to anybody; I don’t have to be a first to anybody. I don’t have to be an imitation of a white woman that Hollywood sort of hoped I’d become. I’m me, and I’m like nobody else.”
The Life. The Legend. The Lena.
Like. Nobody. Else.
Posted by Dan Cirucci at 10:48 AM