New Jersey Gets The Super Bowl! 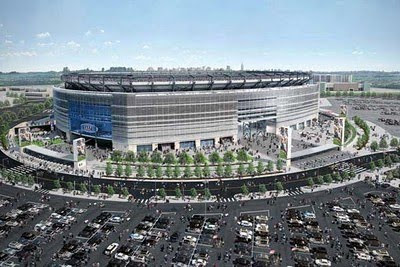 It's official!
Joisey just hit the jackpot, baby.
Yes, New Jersey will host the 2014 Super Bowl at its new Meadowlands Stadium.
But if you've been paying attention to this blog, you sorta knew this was going to happen. So, last night's announcement should not have been a surprise for you.
That's because nearly three months ago we said that it appeared increasingly likely that Jersey would get the Super Bowl. You can read it right here.
When Arizona dropped out of the running, that made it easier for the garden State to snag the Big Game. So, today Governor Chris Christie will be at the Meadowlands to discuss additional details of the 2014 Super Bowl.
But a lot of the credit for all of this goes to New Jersey Senate Republican Leader Tom Kean who has been pushing this idea for quite some time.
Kean has always said that "with the opening of a new stadium, and the backdrop of New Jersey and New York City, Super Bowl XLVIII has the potential to be a very special game." And the Senator I remained optimistic "that the NFL will realize this unique opportunity and select the new Meadowlands Stadium (pictured above) as their venue to host the Super Bowl in 2014."
Well, Tom Kean was right!
This is a great day for New Jersey and a good move for the NFL.
Bravo!
Posted by Dan Cirucci at 9:00 AM