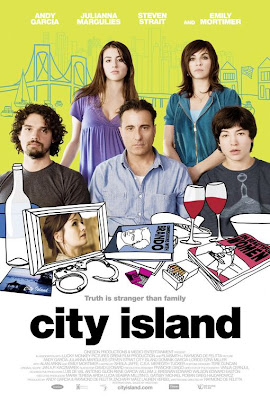 The new film City Island would have us believe that truth is indeed far, far stranger than fiction.
Well, we all know many truths that are far stranger than fiction.
And presumably we also know truths about ourselves that not only defy reason but might also have the makings of a truly incredible story.
And while City Island is a rather incredible story it's also consistently funny, human and endearing.
This is due mostly to the fine ensemble cast that includes Andy Garcia, Julianna Margulies, Steven Strait, Alan Arkin, Emily Mortimer, Ezra Miller, and Dominik GarcÍa-Lorido.
The whole scenario revolves around the members of the Rizzo family and their lives on an off the fishing village of City Island, a wisp of land that is actually part of the Bronx. As the family patriarch Andy Garcia scores beautifully and holds the whole story together. Strait, Marguilies and Miller are also outstanding in their roles.
This is a family that harbors individual secrets.
None of the secrets are so terribly sinister or shameful that they will shock you. The film is in no way sordid or bleak. There aren't any murders or dead bodies or sexual predators lurking in the background.
But the film does speak of our public and private selves -- the faces we show to the world vs. the real people behind the masks and the parts of our past that we may not always be proud of or be willing to admit.
It's great to see Andy Garcia back on the big screen in a role that showcases all of his many talents: his fine timing, his knowing glance, his natural demeanor and the simple truth that he brings to a role -- the honesty that lives within those penetrating eyes. Marguilies is both tough and tender and engaging throughout in a surprising role. And Strait and Miller bring smoldering heat and spontaneous comedy respectively to their roles.
You'll scratch your head at the plot as it unfolds but you'll keep watching and laughing.
This is a sweet, funny, delightful film that ultimately triumphs over its implausibility.
City Island reminds us that no matter our secrets or our geography, none of us really lives on an island.
I recommend it.
Posted by Dan Cirucci at 12:48 PM