When It's Time To Say BuhhhhBye! 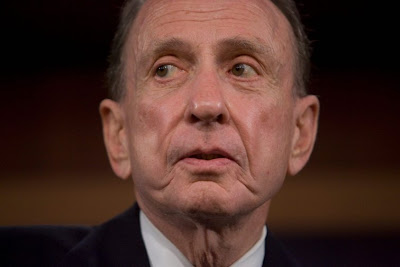 On February 6 in the Philadelphia Daily News I wrote an opinion piece called Folks Who Don't Know When To Fold 'Em.
Here's what I wrote about Arlen Specter:
Arlen Specter – It’s been a long time since Specter was called “younger, tougher and nobody owns him.” Now Specter is dour, inappropriate and stalked by his own hubris. It’s gotten so bad that when he’s not telling someone to “act like a lady” Specter’s stumbling over the names of state political leaders. It’s time for the voters to show this guy the door.
When you don't know when to leave the stage, sometimes the only solution is the hook.
The voters of Pennsylvania took my advice.
They gave Specter the hook.
But the saddest thing was his desperate effort to hang on. In the end, it was painful to watch. It was pitiful. What a way to be remembered.
To read my entire op-ed, click here.
Posted by Dan Cirucci at 7:36 AM