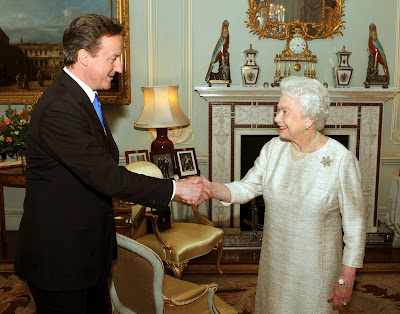 Here is the first photo of Queen Elizabeth formally greeting Britain's new Conservative Prime Minister David Cameron.
The Queen asked Cameron to form a new government after the Labor Party's Gordon Brown tendered his resignation to Her Majesty.
This ends 13 years of Labor rule in Britain and ushers in a new conservative era. The Conservative Party gained the most votes in Britain;s recent national election.
Britain now joins Israel, Italy, France and Germany in moving the right.
Can American be far behind?
Posted by Dan Cirucci at 3:44 PM