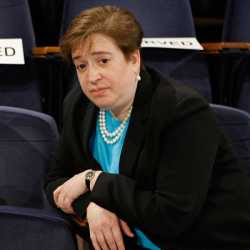 Tomorrow (Monday) President Obama will reportedly nominate U. S. Solicitor General Elena Kagen to the United States Supreme Court.
This former Dean of the Harvard Law School is viewed as a "safe" choice for Obama inasmuch as little is known about her specific views on hot-button political issues. Kagen is considered a "clean slate" even though it's quite clear she is a solid liberal choice.
In short, Kagen leans left and it's unlikely she'll be drifting to the right anytime soon.
In fact, while so-called "conservative" appointees to the court often drift to the left over time, liberal appointees almost never drift to the right. If anything, they usually become more liberal while serving on the court.
Why does this happen?
Many theories are offered but they all seem to come back to the haughty, cloistered nature of the court itself and the sustained pressure of the elite class in that hothouse known as "inside the beltway." The combination is suffocating and self-perpetuating.
Conservatism, on the other hand is grounded in common sense individualism. It does not thrive within rigid intellectual confines.
But Washington is a land of enforced group think where common sense quickly withers and dies.
I may be wrong but I have a feeling Kagen will fit right in.
Posted by Dan Cirucci at 10:37 PM

I, in fact, am a liberal-ish person, and my structured and rigid frame of mind leads me to respond to your vicious attack on my political leanings with the quaint and uber-elite phrase: horse doody.

I'd say that the reason the court trends that way has a lot to do with the geographical location of the various law schools attended, the positions held after finishing law school; basically, where the justices spend most of their lives. Your Harvards, Yales and Pricentons are not really diverse settings as far as the left/right view is concerned. Which leads me to ask, why are there no justices from conservative parts of the country.

But since you asked, I'll take the liberty to answer in a more liberal way. The simple solution to this puzzle is that when confronted with the most monumental tasks involving the interpretaion of the Constitution and the highest echelons of law, after spending lifetimes examining the very fibers that help create the colorful tapestry that is our nation, after countless meditation and reflection, some of the brightest minds of every generation conclude the same thing: a liberal interpretation is the correct interpretation.