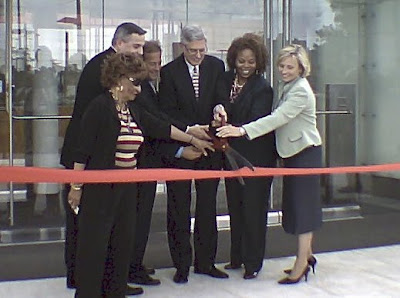 We recently had a chance to join with community leaders, corporate execs, public officials and friends from throughout South Jersey and beyond to celebrate the grand opening of the new world headquarters of the Campbell's Soup Company in Camden, New Jersey.

This was an especially meaningful occasion for me since Camden is my hometown.

Growing up in South Camden I remember the days when the trucks filled with fresh tomatoes would rumble down Camden's side streets toward the Campbell's plant on the riverfront. On warm summer evenings, we could open the front door of our row house, take a deep breath and instantly know what kind of soup Campbell's was cooking. And yes, I knew tons of friends and relatives who worked in the old Campbell's plant. They were the people who made the soup that found its way into virtually every American kitchen.

To me, Campbell's and Camden have always gone together and they've always been partners. And frankly, I admire the way that Campbell's has kept faith with Camden. Many companies deserted Camden but Campbell's was not one of them.

Campbell is the longest-standing corporate tenant in the city and the only Fortune 500 Company headquartered in Camden. The Campbell Soup Foundation has contributed more than $100 million to Camden and other area nonprofit organizations over the last 50 years.

"Campbell has been an anchor institution in the city of Camden for 141 years," Mayor Dana L. Redd said. "This expansion project truly demonstrates Campbell Soup Company's commitment to Camden's revitalization efforts and their pledge to the community. This wonderful new building also sends a clear message that Camden has, is, and will continue to be open for business. I applaud Campbell for its unwavering commitment to our great city, I wish them continued success, and I hope that they will be able to call Camden home for years to come."

Yes, I was so proud to be at this grand opening.

Against the backdrop of a gleaming glass entrance complete with a signature red wall and iconic "Campbell's" logo, hundreds of community members and state and local leaders cheered the expansion, which reflects Campbell's longstanding commitment to Camden, one of the nation's poorest cities and Campbell's home since 1869.

Campbell's President and CEO Douglas R. Conant said, "The completion of this building is the result of a partnership between Campbell, the State of New Jersey, Camden County and the city of Camden. It is a testament to the years of hard work by teams of people committed to a common purpose and determined to overcome whatever obstacles that may stand in the way. We are proud to call Camden home. We have deep roots here, not just on this campus but throughout the city and the entire region. Campbell remains fully committed to the city and its neighborhoods."

Designed by Philadelphia-based architects KlingStubbins, the Campbell Employee Center is part of a broader effort that includes plans for a 100-acre office park in Camden's Gateway District. Campbell plans to invest up to $93 million in the project, which includes its new building, ongoing enhancements to its existing facilities and 40-acre campus, and the acquisition of land for future development. The state, county and city have invested approximately $23 million in the area's infrastructure to improve roads, as well as water and sewer upgrades.

"I am proud that Campbell Soup Company has called New Jersey home for almost 150 years. This project demonstrates the importance of public-private partnerships," said Lieutenant Governor Kim Guadagno. "Governor Christie and I are continuing to focus on making New Jersey a home for growth by enhancing New Jersey's business climate, streamlining our regulatory process and advancing pro-business initiatives."

Well, we could go on -- and we will have more pictures later. But suffice it to say that it was a spectacular afternoon in Camden - a day abundant with hope and promise.

And inside the new employee center we enjoyed delicious treats prepared by Campbell's master chefs and music provided by Camden's own Symphony in C (a followup to the Settlement Music School children's choir singing outdoors at the opening ceremony).

It was a grand time. Bravo, Campbell's! Bravo, Camden!
Posted by Dan Cirucci at 12:09 PM