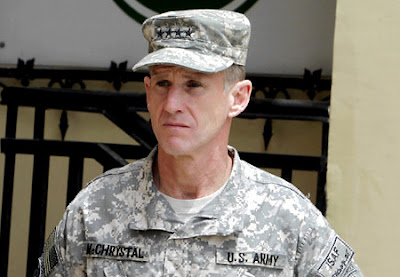 General Stanley McChrystal and his hapless staff have now handed President Obama a huge opportunity.
And the betting here is that Obama will seize the moment and fire McChrystal.
Forget that most of the controversial and derogatory comments out today came not from the General himself but from unnamed members of his staff.
Forget that McChrystal is widely respected and is still probably the best man to wage the ongoing war against terrorists.
Forget that the General has already taken responsibility for these latest mishaps and has apologized.
Forget that overall McChrystal's record has been exemplary.
Forget all that and more.
Obama is on the ropes.
His leadership style (if you can call it that) is under question. His sense of command is in doubt. Even his mere competence has become a matter of debate. His poll numbers are dropping rapidly and he seems aimless, clueless, adrift and in way over his head.
In other words, he desperately needs a Truman moment.
And now along comes the McChrystal stumble.
This gives The One the chance to do what he does best: pretend to lead while bashing others.
So, Obama will step forward, throw back his shoulders, glare into the camera with the best Commander in Chief look he can muster, read the teleprompter and can McChrystal.
And the mainstream media will eat it up.
They will love it.
They will announce that Dear Leader is back and that he is tougher, stronger, more determined and more in command than ever before -- that he stared down the top brass of the military and won; that he knows how to get the job done; that he isn't afraid of anyone. In fact, Big Media will declare this a turning point for the hallowed Realm of Obama.
And this will last, for awhile.
But as the drama unfolds, if you buy what Obama and the mainstream media are selling, I've got some oceanfront property in Kansas that's just perfect for you.
Posted by Dan Cirucci at 10:36 AM