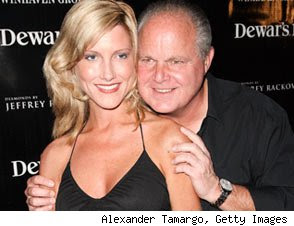 We're told that great secrecy and "tons of security" surround Rush Limbaugh's wedding in beautiful Palm Beach, Fla.
But a friend on the scene is able to report directly from the exclusive resort -- The Breakers -- where the reception is apparently being held.
Friend says the entire Breakers complex is "ringed by security" and that many well-known guests, including Mayor Rudy Giuliani have arrived. The event itself is centered in The Breakers' ballroom and an invite is the hottest ticket in Palm Beach, not to mention the conservative community throughout America, if not the world.
Rush is taking a fourth stab at marriage, this time to Kathryn Rogers, an events coordinator 26 years his junior.
The childless Limbaugh's first two marriages were over by the time he rose to national prominence. His third wedding, to Marta Fitzgerald in 1994, was officiated by his friend, Supreme Court Justice Clarence Thomas. They divorced in 2004.
Before beginning his courtship with Rogers in 2007, Limbaugh was romantically linked to then-CNN anchor Daryn Kagan.
Posted by Dan Cirucci at 6:05 PM