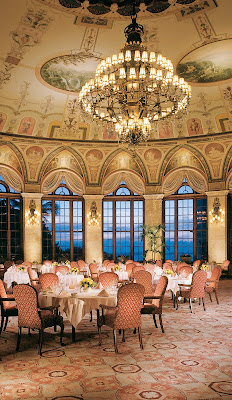 The Rush Limbaugh wedding tonight at The Breakers in Palm Beach features a huge procession of notables all done out in black tie in a strictly high society atmosphere.
Our spies at The Breakers have been sending us regular reports throughout the evening.
Earlier this week Rush was seen snuggled with his young fiance in the Seafood Bar at The Breakers. This legendary Palm Beach destination recently underwent a $250 million dollar revitalization program making it a continuing playground of the rich and famous.
The Limbaugh event is centered in The Breakers Ponce deLeon Room.
But before the actual event hundreds of guests gathered in The Breakers magnificent domed ballroom known as The Circle (shown above). After that, they proceeded through the hotel's main lobby to the Ponce deLeon Ballroom.
Those who were present tell us the scene looked like a Hollywood red carpet runway inside this legendary destination which prides itself on unabashed elegance in a low-key atmosphere.
In addition to Mayor Rudy Giuliani, among those present were James Carville and Mary Matalin. Some have reported that former President George W. Bush is at the wedding as well but that has not been confirmed.
So, it seems as if Rush Limbaugh's fourth wedding was one for the record books.
We certainly wish him well. Cent anni!
Posted by Dan Cirucci at 9:24 PM

Why is Rush Limbaugh using his wedding as an excuse to destroy America's economy?

A wedding and a vacation can destroy the United States!

I really loved this post. You write about this topic very well. There are many prized moments in life, why not wear a gorgeous dress! When looking back on photos of your loved one wearing a stunning dress, it will put a smile on your face

My sons and I spent a week at the Breakers and it is WONDERFUL the Circle Room has the best $75 Brunch on the planet. I can't think of a better place to have a wedding congrats Rush keep livinging the good life it gives everyone else a glimps at the prize.