A Father's Legacy Of Love 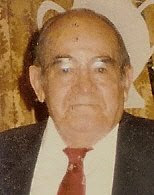 My father communicated his love by his mere presence.
He was constant. Strong. Solid. Enduring.
Just to be with him was to know that you were safe, secure, protected -- to know that no one could harm you.
He seemed to always know which side he was on; what he was willing to fight for; what was important and what was not. Of course, family came first. Everything else flowed from that.
Though he could be pugnacious, he wasn't the type of guy who went around looking for a fight.But he wasn't afraid to fight, either.
In his lifetime I saw him take on guys of larger stature and greater power. I can't say that he always won but he sure as hell made it seem like he won. Why? Because he never really backed down and he was doggedly loyal -- to a cause, to a friend, to what was right. He was proud as well.
And for all the fight in him, he was also never afraid to reach out to the other side at just the right moment (and in his own special way) to be conciliatory.
He was reliable as well. If he gave his word, the job was done; the deed was completed; the promise was kept. So people who wanted to get the job done kept coming back to him. And he always delivered. Yes, he understood that the reward for good work was more work. But he wasn't afraid of work. And no matter how menial the job, he did it carefully and with great pride.
To be sure, he wasn't perfect.
He could be gruff, impatient and ill-tempered. Yet, beneath his tough facade was a tender heart.
Just a couple of weeks before he died he told me that he had absolutely no regrets.
He felt that he had lived a rich and full life -- that he had done it all, heard it all, seen it all.
I always felt that he shot off all of the flashy fireworks of youth in his early years before he was married. So, when he finally found the right woman (and she was perfect for him) he was ready to face the responsibilities of job and family. Still, he needed some taming. But he never really resisted that or her. He was ready.
So, he became and strong and loving father.
And though he's been gone for 22 years now, he lives on vividly for me.
He walks beside me wherever I go. I feel his quiet strength, his enduring presence, his love.
And that love urges me ever onward.
Thanks, dad!
Posted by Dan Cirucci at 12:09 PM

What a beautiful tribute to a wonderful Dad, Dan! It's easy for me to see your dad in you and the way you live your life. Happy Father's Day.