The Gores Split: What's The Inside Story? 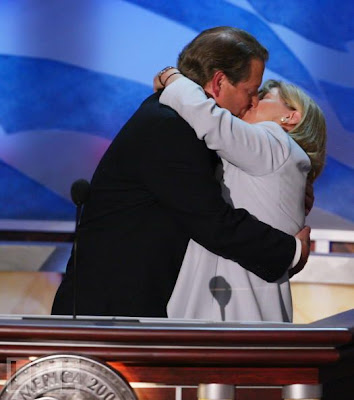 When we heard the story about Al and Tipper Gore separating, we couldn't help but remember that famous long kiss that Al landed on Tipper at the 2000 Democrat National Convention -- you know, that swooning, swooping, very public back dip kiss that had everybody talking.
Talk about a gratuitous PDA!
Over the years these two have often spoken about their undying love for one another and they haven't been shy about showing it. In fact, sometimes it seems they went out of their way to demonstrate their great affection for each other.
We wish them the best. But we can't help but wonder what's behind the breakup of a couple who never hesitated to proclaim how very much in love they were.
We're guessing that the 2000 race took its toll on the couple and that's understandable. It must have been hard to survive garnering more votes but still losing the election. Surely, it was heartbreaking. We can understand that.
Politics is a grueling business.
And Vice President Gore never seemed to be the same after that 2000 election. He seemed a changed man.
Anyway, here's the official word from CNN:
Former Vice President Al Gore and his wife Tipper said Tuesday that they have decided to separate.
“We are announcing today that after a great deal of thought and discussion, we have decided to separate,” the Gores said in an email to friends. “This is very much a mutual and mutually supportive decision that we have made together following a process of long and careful consideration. We ask for respect for our privacy and that of our family, and we do not intend to comment further.”
The separation was confirmed to CNN by Gore spokeswoman Kalee Kreider. The Gores were married in 1970 and have four grown children. Vice President Al Gore served alongside former President Bill Clinton in the White House from 1993 until 2001. Gore lost his own bid for president in 2000. He served in Congress before Clinton picked him to be his running mate in the 1992 race for the White House.
In recent years, the former vice president has become a leading voice warning about the dangers of global warming.
Posted by Dan Cirucci at 12:59 PM