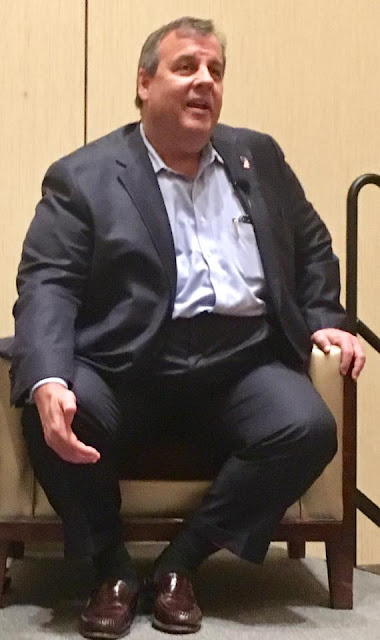 Chris Christie has been called the greatest practitioner of retail politics of his generation.
And while I think this is a high compliment, I don't think it does him justice.
I was reminded of this as I observed Governor Christie in his element, at the New Jersey Republican Leadership Summit in Atlantic City this past weekend. Christie scheduled a book signing at the summit for his new New York Times bestseller, Let Me Finish. The program also included an informal chat with his friend and former re-election campaign chair Bill Palatucci. It was all set up as a small-format event for pre-registered guests who purchased Christie's book.
Since I had not seen Governor Christie in quite some time, I got there early and sat in the front row -- just as I did at so many Christie campaign events over the years.
And then The Gov arrived.
I watched him closely as he entered the room and ascended the platform. At first, I wondered how things would go because Christie seemed tired and maybe even a bit hassled. I had seen him the day before on Fox & Friends and I knew he had been on a continuous book tour and was also making non-stop media appearances to promote Let Me Finish. I guessed that this would be a fairly quick session and that The Gov might even be bit abrupt.
I was wrong.
As soon as he looked around the room, Christie's demeanor began to change. He saw familiar faces -- people who had been in his corner for a long time; people who helped him along the way; people who he helped as well. Chris Christie saw friends -- friends from his home state; people who knew him and cared about him and trusted him. And you could tell that for him this brought back many fond memories.
As the Q & A began, he became more animated. He started pointing to people and calling out people in the audience by name as he told stories and remembered faces, events and places. The whole room came alive and Chris Christie had people smiling and laughing as they reminisced along with him.
And you could see the change in The Gov.
He was home.
He was comfortable.
He was candid.
And he shared tales that he only tells his friends because he knew that throughout his time in public office, he had given these people his all.
And here's the point: yes, Chris Christie is a master of retail politics and he can charm a small group like this and schmooze one-on-one with the best of them. He's a consummate salesman, no question about that.
But Chris Christie isn't running for anything right now; he doesn't need any favors and he's not seeking any campaign funds or volunteers or votes.
Right now Chris Christie is very much in-the-moment. And it's clear that he harbors no regrets and indulges no "could-have-beens." He's at ease with himself because he knows where he's from, what he's all about and who he really is.
And who he is transcends mere technique.
This is a man who dares to be himself -- wherever, whenever, whatever.
That's why he remains a potent and compelling public figure.

Note: In an additional post I will talk more about what Chris Christie said at the weekend NJ GOP Leadership Summit. Stay tuned!
Posted by Dan Cirucci at 9:23 AM