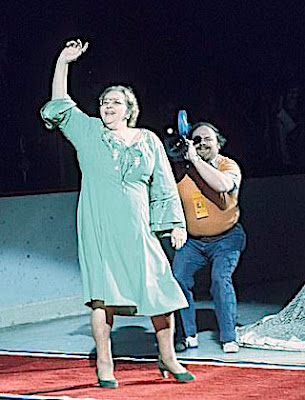 Of all the stories we've reported on this blog over a period of more than ten years, few have generated the interest (and, quite frankly, the outrage) as the story of the Philadelphia Flyers and the New York Yankees banning Kate Smith and God Bless America.
From the minute we first commented on this story nearly 10 days ago, the reaction has been overwhelming. In fact, our post defending Kate Smith (and its various updates) have generated more than 11,000 page views.
But it's not just us.
This story continues to gain nationwide attention -- most of it negative -- day after day. If the Flyers and the yankees thought this would be a one or two or three day story, they were wrong, wrong, wrong!
Here are some excerpts of the latest negative feedback from various news outlets that we've been able to gather:

From David Maialetti at the Associated Press:


. . . she [Kate Smith] has been posthumously singled out and put on trial like a Salem witch – without a chance to defend herself or her motives – as both the hometown Flyers and New York Yankees, a team so reluctant to sign black players that they reportedly passed on Willie Mays, have taken steps to make sure the singer of “God Bless America” is vanquished from history.
Truth be told, the Flyers winning the Stanley Cup in 1974 – and again in 1975 – was a highlight of my wayward youth. The whole Kate Smith thing – the playing of “God Bless America” and her showing up in person before Game 6 of the finals in 1974 to belt out the song – was a bit silly to me (and I was the ripe old age of nine).
The fact that the Flyers erected a statue of her was embarrassing, but taking it down – now – is beyond mortifying.
Left in the place of where the statue once stood, we have yet another downright blatant case of political correctness run amok.
In the final analysis, this is more about what is or isn’t fair when dealing with what I regard as the most valued possession any person has, that being their legacy. . . .
These ignominious events caused me to research Smith a bit more, and I found nothing – as in zero – that the woman held any racist views.


From Doug McIntyre of the Los Angeles Daily News:


There is zero evidence Kate Smith was anything other than a wonderful person, a great American who served her country during an epic war and put her popularity on the line by inviting the controversial (and brilliant) Josephine Baker to appear on her television show. Of the 3,000 songs Smith recorded, two have been exhumed from eight decades ago and have been used to ruin her reputation for eternity. Yes, eternity. Vegas has nothing on Google. Once something is on the web it stays on the web.
So, “Kate Smith” and “racism” will pop up in search engines forever. The same way “McIntyre” and “bad hair” will show up. If it can happen to someone as benign as Kate Smith it can happen to anyone. . . . .If we are to excommunicate artists from other eras of history because they made the mistake of being born when and where they were born then we will become the very people we claim to despise: book burners. . . . . As we strive for a fairer, freer, less judgmental world, a good place to start would be to stop judging men and women of the past by the standards of today. If the social media-driven cybermob continues to pull down everyone and everything that fails their ever-changing wokeness litmus test, “God Bless America” will soon become “God Help America.”


From Phillip Morris of the Cleveland Plain Dealer:


One day, Smith rested comfortably in her grave, renowned as a musical genius and winner of the Presidential Medal of Freedom. The next day, her favorite hockey team had covered her head with a sheet.
In February 1976, Smith performed a weeklong series of concerts at Cleveland’s Front Row in Highland Heights. Her health was already declining, and she would soon stop her national tours. But the sold-out audiences connected with the aging musician. She closed all of her sets with “God Bless America.”
Jane Scott, the venerable Plain Dealer Rock Critic, attended the Wednesday concert and wrote a glowing review. She noted Smith’s “majestic voice” and “booming, hearty manner.” She described her as “old fine wine.” . . . .
Kate Smith had a catalog of hundreds of songs. Two of those songs have come back to haunt her from the grave. Nonetheless, the body of her work stands. God blessed America with Kate Smith.


From Newt Gingrich at Fox News:


Smith was an iconic pop singer with more than 3,000 recordings to her credit.
As the Smithsonian Magazine reported:
“‘God Bless America’ was her most iconic hit. In 1938, Smith was reportedly searching for a song to perform on her CBS radio program on the 20th anniversary of Armistice Day. She reached out to composer Irving Berlin to find out if he had anything new to offer, and Berlin decided to finish a song that he had started writing one year earlier. ‘In a short time, the song supplanted ‘The Star-Spangled Banner’ as the nation's most popular patriotic song,’ the Times reflected in her 1986 obituary, adding, ‘There were attempts—all unsuccessful—to adopt it formally as the national anthem.’”
She was such a symbol of patriotism that, to quote the Smithsonian Magazine again:
“In 1982, President Ronald Reagan awarded her the Presidential Medal of Freedom, the nation’s highest civilian honor.
“‘Kate always sang from her heart, and so we always listened with our hearts,’ Reagan remarked. ‘It's been truly said that one of the most inspiring things our GIs in World War II, Europe and the Pacific, and later in Korea and Vietnam, ever heard was the voice of Kate Smith.’”
Despite decades of patriotically serenading our military – and having sung the most popular patriotic song in American history – Smith could not survive the judgmental hatred of the modern left.