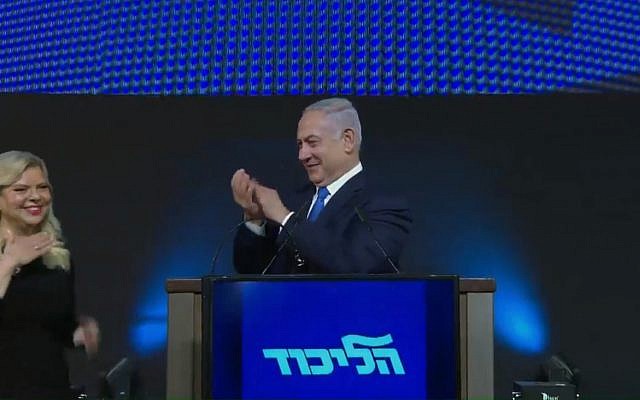 From all indications, the voters of Israel have once again placed their faith in Benjamin "Bibi" Netanyahu.
The Prime Minister sees a clear path to victory and will set about the business of forming a government with his natural allies to take Israel into its next chapter as the great beacon of democracy that it is, and as Americans treasured ally.
Below, excepted from The Times of Israel:


Netanyahu addresses his Likud base in Tel Aviv, who are cheering wildly and whistling.
“You are terrific, thank you,” says Netanyahu, over applause.
“Remember, 23 years ago, it was the first time that Sara and I stood here. And here we have returned here, because of you and for you,” he says. . . .
He thanks the Likud ministers and Knesset members. . . .
“I am very moved on this night. This is a night of an incredible, incredible victory.”
He says it is a “fantastic achievement, an enormous achievement, which is almost unfathomable.”
Netanyahu applauds his supporters for securing his win in the face of a “biased media.”
He calls the Likud outcome “almost unprecedented,” saying, “When did we receive so many seats? I don’t even remember.”

It's been a long night in Israel and very well may be a long day tomorrow but the voters certainly appear to have chosen a strong government led by a legendary leader and, from all indications, they have opted for stability, national unity and a regime that puts safety, security and prosperity first.