Son Of Late Flyers Owner On What's Been Lost

Below the photo of former Flyers owner Ed Snider, Kate Smith and Bobby Clarke you will find excerpts from an op-ed written by Craig A. Snider, Ed Snider's son.

The entire column, which appears in the Philadelphia Inquirer is just beautifully written.
I’m not a sports fan but what Craig has written remains very meaningful to me because it captures the sense of team-spirit that fuels America and propels us to succeed. I don’t think that Americans have lost that because I see it every day in so many big and small ways in interactions between ordinary people -- the people who do the work, pay the bills, follow the rules and make America work.
But the big corporations and billionaires referred to by Craig don’t seem to see that because they’re huge international conglomerates that are largely disconnected from it all; insulated from it. THAT’s why people like Ed Snider are so sorely missed. 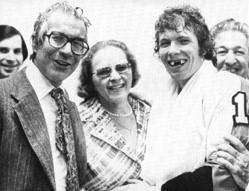 When the dust settles, Kate Smith’s name may well be cleared of the recent charges of racism leveled against her. However, the fallout from the Philadelphia Flyers’ swift and unceremonious dumping of her into the trash bin of history; the haunting image of her statue--covered head-to-toe in black sheets, ropes tied around her body--will not be soon forgotten.

But obscured by the headlines is a hidden dimension of this story. It’s about the sense of community, common cause and goodwill that a team forges among its fans in both good and bad times. We wear the same team jerseys and t-shirts. We check our gender, race and class identities at the door. Win? We laugh, hug and high-five. Lose? We grouse and curse together. A shared identity among 20,000 politically and culturally diverse people is precious and rare in today’s deeply divided society. Born in the late 60’s and lifted by the rising tide of rock and roll in the 70’s, the modern arena has become a city’s center, the crossroads of culture. . . .

For fifty years, The Spectrum was my family’s second home, its people my people. Nobody saw the other as rich, poor, black, white, gay or straight. Inside the arena we were like Switzerland, politically neutral. What’s happens out there, stays out there. We have a game to win, a star to admire, a family to get home safely.

People are asking what Ed Snider would have done? Having gotten to know Kate Smith personally over many years, I suspect he would have taken time to learn the facts before rushing to judgement. As a beloved member of the Flyers extended family, she deserved a full hearing. But times have changed. Teams and arenas are owned today by corporations and billionaires who made their names and fortunes elsewhere. When Ed Snider died three years ago, the family ethos was buried with him. . . .  .
Posted by Dan Cirucci at 7:52 PM