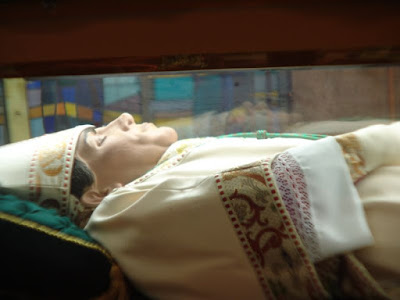 Philadelphia's newest museum is set to debut in one of the trendiest, most happening neighborhoods in town. But this museum has a history and allure all its own.

Archbishop Charles J. Chaput, O.F.M. Cap. will preside over the blessing and ribbon cutting ceremony to mark the grand opening of the newly constructed Saint John Neumann Museum, sponsored by the Redemptorists at the National Shrine of Saint John Neumann.

Since January 1860, the body of Saint John Neumann, fourth bishop of Philadelphia and America’s first male saint, has lain in repose in the lower church of Saint Peter the Apostle in Philadelphia. The shrine is visited annually by approximately 50,000 people from around the world. Those who come to venerate Saint John Neumann and seek his intercession are Catholic and non-Catholic alike.

The museum is the latest cultural asset to Philadelphia’s Northern Liberties neighborhood and completes a five-year renovation of the campus that comprises Saint Peter the Apostle Parish, Saint Peter the Apostle School, and the National Shrine of Saint John Neumann. The museum celebrates Saint John Neumann’s tenacity in life and heavenly intervention in death. Many of the objects placed on display have never been seen before by the general public. These include the 1790 edition of the Mathew Carey Bible, the first English-language Catholic Bible printed in the United States. The museum not only highlights objects important for Neumann’s life and ministry, it will also guide visitors through some important moments in American Catholic history, setting the stage for Neumann’s own missionary labors, first as a diocesan priest, then as a Redemptorist and bishop. 4
Monday, April 29, 201910:00 a.m. The National Shrine of Saint John Neumann 1019 North 5th StreetPhiladelphia, PA 19123

In addition, the ceremony will kick-off a week-long celebration that includes daily museum tours beginning at 3:00 p.m. followed by cultural events each evening. For a complete calendar of events, please visit
https://stjohnneumann.org/events/action~week/exact_date~4-29-2019/.

Note: For over 175 years, Redemptorists have staffed the church of Saint Peter the Apostle and faithfully promoted the holiness exhibited by the saint. Founded in 1732 by Saint Alphonsus Liguori, the Redemptorists have been in the United States since 1832. In 1842, Saint John Neumann became the first man in America to join the order.

To learn more about the National Shrine of Saint John Neumann, please visit https://stjohnneumann.org/.
Posted by Dan Cirucci at 7:19 PM