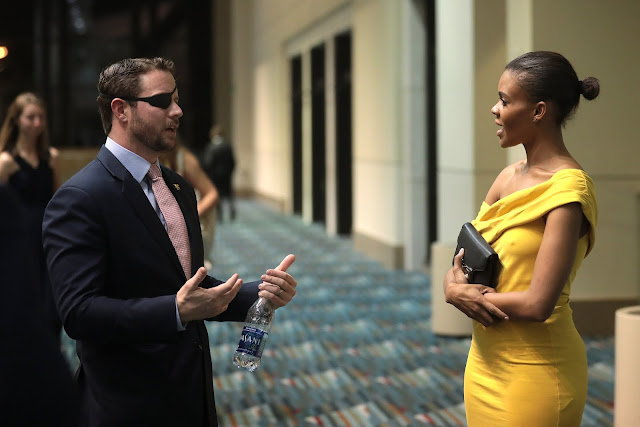 It used to be that our favorite conservatives were people like William F. Buckley and George Will -- conservative commentators who could best be described as erudite but, in the end, relatively harmless. Conservatism was buttoned-up, dull and largely contained within the atmosphere of a debating society.
But things have changed.
In the era of social media, Trumpmania and the 24-hour news cycle, conservatism has come alive both in form and substance. Today, conservatism has a decidedly populist tone and conservatism's spokespersons are feistier, more colloquial and more willing to take the offensive in the ongoing battle of ideals and ideas. In short, the whole conservative movement is more accessible and more meaningful to people in their everyday lives.
And much of this is due to modern conservatism's bright, new army of quick-witted warriors. They're younger, they're tougher and nobody can pigeonhole them. In fact, we like them so much that it's hard to pick our top ten. But, what the hell, let's give it a try.
Here they are, in alphabetical order:

1) Guy Benson
At 34, Benson (who grew up in Ridgewood, New Jersey) doesn't appear to be a day over 25. He is a contributor at Fox News, political editor of Townhall.com, and a talk radio host who quite matter-of-factly came out as gay in 2015. Don't let his boyish demeanor fool you. This former White House intern is a first rate intellectual grappler.

2) Sara Carter
An indefatigable investigative reporter, and frequent Fox News contributor, Carter's dogged look into the infamous Steele dossier and the antics of Comey & Co. blew the lid off the Mueller investigation and related witch-hunts.  Carter, who speaks Spanish fluently, is the daughter of a Cuban immigrant mother and her father was a Marine and veteran of two wars. Her star is on the rise!

3) Tom Cotton
We'll match the credentials of this US Senator from Arkansas up against anyone else's: Harvard, Harvard Law School and service in Afghanistan and Iran where he retained the rank of First Lieutenant and was awarded the Bronze Star. As a member of the editorial board of The Harvard Crimson, Cotton often dissented from the liberal majority. He's been fighting the good fight ever since!

6) Trey Gowdy
We love this former congressman's capacity for outrage. We hove his disarming southern accent. We love his studied demeanor; the probing questions he asks; his incisive analysis and the fact that he's so quick on the uptake. We can't understand exactly why he left Congress  but we're sure as hell glad he's still around to take on the endless array of liberal hypocrites.

7) Laura Ingraham
She's the host of Fox News Channel's hugely popular Ingraham Angle where she shares a fresh perspective on culture and politics. She's also the Editor-in-Chief and Co-Founder of the news website, LifeZette.com, a cultural and political web destination for conservatives and independents. Her daily take on on events in Washington and elsewhere is a must for serious conservatives.

8) Charlie Kirk
After Donald Trump, nobody knows how to use Twitter more effectively than Charlie Kirk. The tweets from this Turning Point USA founder are dynamite: succinct, clever and hugely informative. With Turning Point, Kirk has shown conservatives how to reach new generations precisely where they live. Turning Point now has representation on over 1,200 high school and college campuses nationwide. And Kirk is all of 24 years old. Bravo!

9) Candace Owens
An exceptionally articulate commentator and activist, she's also the Communications Director for Turning Point USA. Like more than a few new conservatives, she is a former liberal. Owens is known for her criticism of Black Lives Matter. She has described Black Lives Matter protesters as "a bunch of whiny toddlers, pretending to be oppressed for attention". Owens has argued that African- Americans have a "victim mentality" and often refers to the Democratic Party as a "plantation".

10) Tim Scott
Raised by a single mom, he grew up in working class poverty with his mother working 16-hour days to support her family. Now a US Senator from South Carolina, he's the first African-American to ever serve in both houses of Congress. While he doesn't agree with President Trump on everything he is a reliable conservative and is there when it really matters. Quick history lesson: Scott also became the first African-American Republican elected to Congress from South Carolina in 114 years. From 1895 to after 1965, most African-Americans had been disenfranchised in the state, and they had comprised most of the Republican Party when they were excluded from the political system by Democrats after reconstruction.

And now, one more for good measure:

Ben Shapiro
At 35, this nationally-known commentator and lawyer has already written ten books, the first being 2004's Brainwashed: How Universities Indoctrinate America's Youth. Shapiro began writing this book at age 17. Also at age 17, he became the youngest nationally syndicated columnist in the United States. He's also editor-in-chief for The Daily Wire, which he founded, hosts The Ben Shapiro Show, a daily political podcast and radio show and is Young America's Foundation's most popular campus speaker. His newest book is The Right Side of History: How Reason and Moral Purpose Made the West Great.

Bottom Line:
For every Bright Rising Star that you hear about on the left, there are four or five on the conservative side. But you don't hear about the stars on the right because the liberal media don't want you to hear about them. Still, we've got the cream of the crop and a band of resolute warriors who are ready to lead us into all the battles ahead.
The future is conservative -- and it's very, very bright!