Our review of this legendary show from danonbroadway.blogspot.com:

Tale as old as time . . . Well, no -- we're not talking about Beauty and the Beast. No quite, anyway.
But we are talking about a story of transformation -- one that does involve a mismatched pair. But this is a story with an ending that is neither happily-ever-after nor obviously definitive.
Still, it is an old an enduring tale -- one that has its roots in Greek mythology.
It's George Bernard Shaw's Pygmalion, the story of that endlessly captivating pair, Eliza Doolittle and Professor Henry Higgins. She, the common, oafish, poorly-educated mangler of the English language and he, the erudite, sophisticated, condescending defender of the Mother Tongue.
When composer Frederick (Fritz) Loewe and lyricist Alan Jay Lerner set out to turn Shaw's play into a Broadway musical, they found themselves facing a puzzle they almost could not solve. How do you convert such a loquacious piece of theater into a pop operetta? They wrestled with this dilemma for a very long time. And then Lerner (who also wrote the libretto for the show) got out of the weeds and discovered a solution that was right in front of them: wherever possible, turn Shaw's words into songs and integrate them seamlessly into the story.
The result is My Fair Lady, one of the most endlessly chatty and enormously successful musicals in Broadway history -- so successful, in fact, that it's been called Broadway's "most beloved musical".
But for all of its appeal, My Fair Lady doesn't deliver a classic Broadway sound. To begin with, it remains veddy British. And, the music veers between an English music hall sound and the mannered patter of a proper drawing room. It's sort of a mash up of Lionel Bart, Andrew Lloyd Webber and Anthony Newly with a bit of Noel Coward thrown in. Yet, it remains distinctly its own property.
From the bombastic I'm Getting Married in the Morning to the lush I Could Have Danced All Night; from the rigid and repetitive Rain in Spain to the rapturous On The Street Where You Live, My Fair Lady covers all the bases and in the process plays on both our sensibilities and our heartstrings. 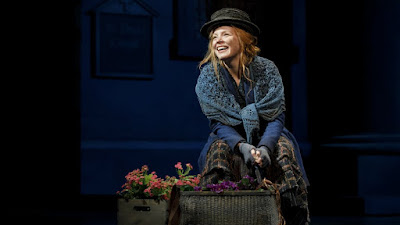 In its new Broadway production at Lincoln Center's Vivian Beaumont Theater, this captivating musical gets a full, glorious treatment with a cast of 37 and an orchestra almost as large. Under the able direction of Bartlett Sher, the entire production moves along like a well-oiled and very precise British timepiece.
What we're treated to is a bit more adept Eliza in Lauren Ambrose (she's certainly got her wits about her) and a younger, perhaps less brittle Higgins in Harry Haddon-Patton. To be sure, they're quite a match and they do go at one another along a choppy road dotted with malapropisms, brickbats and an ample dose of verbal daggers. Of course, it's still hard not to think of Rex Harrison (we saw a revival with Harrison years ago) and Julie Andrews in the lead roles. But this is an updated edition with an Eliza who's more of a peppered redhead and a Higgins who is lithe and stylishly handsome.
And, the supporting cast is so adroit that the big show stoppers like I'm Getting Married are not only intact but they're actually better and more energetic than we remember them. Here, the credit must go to Christopher Gatelli's fine choreography and the standout performance of Norbert Leo Butz as Eliza's father, Alfred P. Doolittle. Butz is an absolute Broadway treasure -- a performer who radiates such energy and who so completely inhabits a role that he takes your breath away. The joy that he takes in his performance is palpable and it is a highlight of the show. And what a special treat it is to see Diana Rigg as Mrs. Higgins, the wise and imperious materfamilias who still holds sway over her smug and irascible son. Rigg doesn't overplay the role but rather sets just the right tone. And Michael Yeargan's design of Higgin's stately abode is simply a three-dimensional treasure.
Do we have any quibbles with this grand production? Well, yes. Jordan Donica as Freddy is a bit too giddy and somewhat too operatic in his deliver of On The Street Where You Live. It's all up here when it should be more nuanced. The song needs to be acted rather than belted. And Allan Corduner is a tad too fey as Colonel Pickering. On top of all that, Catherine Zuber's costumes are not terribly memorable. But than again, who could possibly top Cecil Beaton?
To be sure, these are minor objections since, overall this is as fine a production as you are likely to currently see.

And now comes the spoiler alert: We all know that the final scene of My Fair Lady can be wonderfully touching and romantic for some (Eliza returns!) or maddeningly inconclusive for others (well, does she really?). In this production, no dialogue has been changed but there is an alteration in the staging of the final scene. We won't give the ending away completely but we will tell you this: we didn't like it! You, on the other hand, may have a completely different reaction.
Posted by Dan Cirucci at 9:15 PM