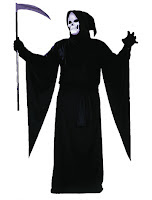 A few days back I wrote about the New Year's Eve game where participants predict which famous people would die during the coming year.
But now one of the game's founding players says I made the game sound all too easy. You see, when I listed who I thought might die I deliberately selected well-known people in their 90s.
But the point of the game is to select people who are not obviously at death's door. For example, I listed former radio and TV host Art Linkletter as a likely candidate for the grim reaper in '08. Then, a couple of days later Linkletter's son Jack (also a former TV host) passed away at age 70, survived by his famous father.
So, if you choose to play this game on Monday evening, forget the famous octogenarians and nonagenarians and focus more realistically on celebrities who are not up in years but might expire during the coming year, anyway. In other words (I suppose) you should remember that death is often lurking where you least expect to find it.
Whew! Enough cheery thoughts, hmmm?
Posted by Dan Cirucci at 7:37 PM

By the way, I think that the "100-27=63" in my previous comment should prove why I didn't enter a math-based profession.

It is interesting and entertainment game its give some knowledge to people .