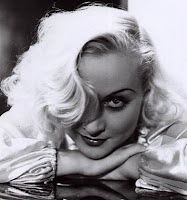 Next year will mark the centennial of the birth of Carole Lombard.
Born Jane Alice Peters in Fort Worth, Indiana she went on to become one of Hollywood's great stars. This legendary beauty and Academy Award nominated actress was also a first-rate comedienne and a passionate human being who was not in the habit of mincing words or hiding her feelings.
Carole Lombard was authentic. She had no pretenses and audiences knew it and loved her for it.
I've just finished watching Carole and Frederic March on Turner Classic Movies in 1937's "Nothing Sacred" directed by William Wellman. This clever comedy dared to poke fun at the mass media and the masses in a manner that was way ahead of its time.
Hollywood lost a great star and movie goers lost a beloved champion when the plane carrying Carole Lombard back from a war bond rally crashed near Las Vegas in January, 1942. Carole was only 33 at the time.
FDR, who greatly admired Carole's patriotism, declared her the first woman killed in the line of duty during World War II and posthumously awarded her the Presidential Medal of Freedom. The Liberty ship SS Lombard was named for her and launched in 1944.