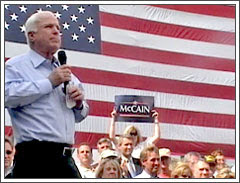 John McCain won the endorsement of his colleague and longtime friend, Senator Joe Lieberman, this morning.
McCain, who was dismissed as "toast" not very long ago, now seems to be gaining once again. McCain has also won the endorsement of the Des Moines Register, the Boston Globe and the Manchester Union-Leader. It's quite possible that McCain will win the New Hampshire primary. McCain has been very popular with New Hampshire voters over the years. In New Jersey, popular former Governor Tom Kean has endorsed McCain. But Kean's son, State Senator Tom Kean, Jr. has endorsed Giuliani.
Of Giuliani, one of our readers notes: "When Rudy was mayor of NYC, he had no problem being pro choice. He was also pro gun control as a US Attorney and as mayor did an admirable job in reducing New York's rate of violent crime. What would be so terrible to have a 'Rockefeller' Republican candidate - socially liberal, economically conservative?"
It's an intriguing notion. But Rudy isn't positioning himself as a "Rockefeller Republican" because he knows he simply cannot win the nomination that way.
In truth, many people see McCain as Rudy without the baggage. And in the end that may make the difference.
Posted by Dan Cirucci at 11:26 AM