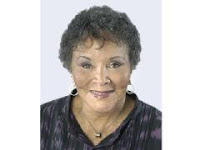 Yesterday I sat next to legendary Philadelphia broadcaster Edie Huggins at the Philadelphia Bar Association's Annual Meeting luncheon. As always, it was a joy being with this consummate TV newscaster.
Edie is not only one of Philadelphia's most accomplished news journalists but she's also one of the nicest people I've ever known. Of course, she's been inducted into the Philadelphia Broadcast Pioneers Hall of Fame. But did you know that the Urban League designated Edie Huggins as one of the Outstanding African-American Philadelphians of the 20th Century?
Edie is a trailblazer. She has opened the door for so many others. And she continues to live her life and pursue her profession with grace, care and a genuine concern for all.
In a business where personalities come and go and authenticity is often in short supply, Edie Huggins is the real deal.
Posted by Dan Cirucci at 3:52 PM