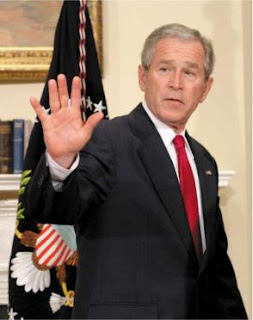 From the Farewell Address of President George W. Bush:
Tonight I am filled with gratitude – to Vice President Cheney and members of the Administration; to Laura, who brought joy to this house and love to my life; to our wonderful daughters, Barbara and Jenna; to my parents, whose examples have provided strength for a lifetime. And above all, I thank the American people for the trust you have given me. I thank you for the prayers that have lifted my spirits. And I thank you for the countless acts of courage, generosity, and grace that I have witnessed these past eight years. This evening, my thoughts return to the first night I addressed you from this house – September 11, 2001. That morning, terrorists took nearly 3,000 lives in the worst attack on America since Pearl Harbor. I remember standing in the rubble of the World Trade Center three days later, surrounded by rescuers who had been working around the clock. I remember talking to brave souls who charged through smoke-filled corridors at the Pentagon and to husbands and wives whose loved ones became heroes aboard Flight 93. I remember Arlene Howard, who gave me her fallen son’s police shield as a reminder of all that was lost. And I still carry his badge.
As the years passed, most Americans were able to return to life much as it had been before Nine-Eleven. But I never did. Every morning, I received a briefing on the threats to our Nation. And I vowed to do everything in my power to keep us safe. Over the past seven years, a new Department of Homeland Security has been created. The military, the intelligence community, and the FBI have been transformed. Our Nation is equipped with new tools to monitor the terrorists’ movements, freeze their finances, and break up their plots. And with strong allies at our side, we have taken the fight to the terrorists and those who support them. Afghanistan has gone from a nation where the Taliban harbored al Qaeda and stoned women in the streets to a young democracy that is fighting terror and encouraging girls to go to school. Iraq has gone from a brutal dictatorship and a sworn enemy of America to an Arab democracy at the heart of the Middle East and a friend of the United States.
There is legitimate debate about many of these decisions. But there can be little debate about the results. America has gone more than seven years without another terrorist attack on our soil. . . .
I have often spoken to you about good and evil. This has made some uncomfortable. But good and evil are present in this world, and between the two there can be no compromise. Murdering the innocent to advance an ideology is wrong every time, everywhere. Freeing people from oppression and despair is eternally right. This Nation must continue to speak out for justice and truth. We must always be willing to act in their defense and to advance the cause of peace.
Posted by Dan Cirucci at 8:28 PM

Chris Matthews makes me sick. Honestly, the left-wing looneys are taking Bush-bashing too far. Even in today's society of excess, I think normal Americans have to be sickened by guys like Olberman and Matthews. All I can say to them is. Let it go. Your man is in the White House. Let it go.

I think they are scared. I really do. If your entire show is based upon bashing the President and the Republican Party, like their shows are, you are in trouble in the coming months. What the hell are they going to do? I think the whole negative to positive transition period is screwing with these guys heads. This could be intresting to watch.