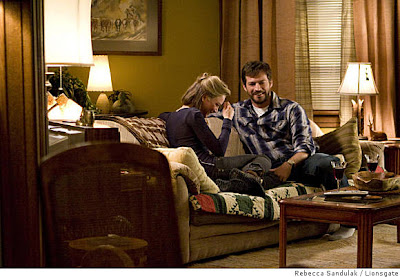 We just saw an advance preview of the flick New In Town (starring Renee Zellweger and Harry Connick, Jr.) and we can report to you that Hollywood still hates big business.
Hollywood's disdain for corporate America goes back a long ways.
And as you watch the opening scenes of this flick about a food processing plant in New Ulm, Minnesota you can almost predict what's going to happen to the town and the workers at the plant after the plant has been acquired by a large corporate entity headquartered in Miami.
Renee is the gal who is new in town.
Harry is the guy who came to town from North Carolina and made it his own. He's now the local union rep. Harry's a veritable "townie" but he's still able to empathize somewhat with Renee who is sent to New Ulm to run the plant.
Well, I guess you can figure out where the romance comes in. Hey, in Hollywood "conflict of interest" never gets in the way of the script.
And those corporate execs are real meanies except when a quick turnaround is needed.
Grumpy Old Men was a better movie about the northlands.
The Coen brothers' Fargo was much better.
But it is fun to see Renee and Harry, two of our personal favorites.
Come to think of it, if Renee had married smooth crooner Harry instead of self-absorbed Kenny she would have been better off in the long run.
New In Town opens January 30.
Posted by Dan Cirucci at 10:31 AM