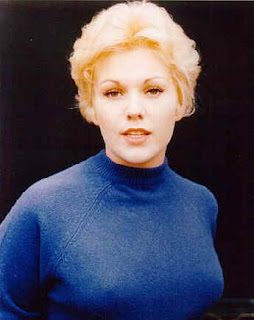 Kim Novak.
The very name of this legendary Hollywood star conjures up visions of ethereal beauty.
The story goes that Columbia studio chief Harry Cohn was searching for another starlet to replace the difficult Rita Hayworth when he signed Novak (that is her real name) to a six month contract. The studio wanted to make Novak its version of Marilyn Monroe.
But there was only one MM.
And that was just as well because Novak defined a new type - the cool, sensual, detached, mid-century blonde.
Novak debuted as Lona McLane in Pushover (1954) opposite Fred MacMurray and Philip Cary. Though her role was not the best, her beauty caught the attention of fans and critics alike. She then played the femme fatale role as Janis in Phffft! (1954) opposite Judy Holliday, Jack Lemmon, and Jack Carson. Novak's reviews were good. People were eager to see the new star, and she received an enormous amount of fan mail.
After playing Madge Owens in Picnic (1955) opposite William Holden, Novak won a Golden Globe for Most Promising Newcomer and for World Film Favorite. She was also nominated for the British BAFTA Film Award for Best Foreign Actress. She played Molly in The Man with the Golden Arm (1955) opposite Frank Sinatra on loan-out to United Artists. The movie was a big hit. She was paired with Sinatra again for Pal Joey (1957), which also starred Rita Hayworth. She also starred in Jeanne Eagels (1957) with Jeff Chandler. Her popularity became such that she made the cover of the July 29, 1957 issue of Time Magazine.
In 1958, Novak starred in Hitchcock's classic thriller Vertigo opposite James Stewart. Hitchcock had intended his latest blonde protegee Vera Miles to star in the film but Miles' pregnancy and, later several production delays, prevented Hitchcock from realizing his intention. Instead, Novak played the dual roles of the elegant, troubled blonde Madeleine Elster and the earthy shopgirl, brunette Judy Barton. Today, the film is considered a masterpiece of romantic suspense, and Novak's turn is possibly the most admired of her career.
The other night I watched Novak, Stewart, Lemmon and Elsa Lanchester in Bell, Book and candle, a delightful tale of witchery set in 1950s Manhattan. On Turner Classic Movies, Novak and Stewart remain great together along with Ernie Kovacs in a juicy supporting role.
In 1995, Novak was ranked among the 100 sexiest stars in film history.
In a New York Times tribute Stanley Fish has said: Novak was "something that has gone out of fashion and even become suspect in an era of feminist strictures: she was the object of a voyeuristic male gaze."
As TCM host Robert Osborne observed, one look at Novak and he’s lost.
And so are we all -- mesmerized by this legendary beauty and accomplished actress and star.
Posted by Dan Cirucci at 10:53 AM