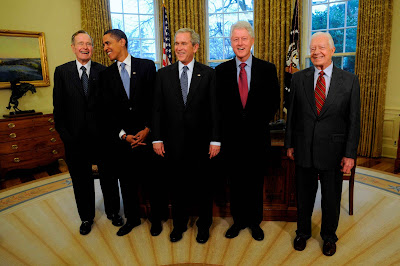 As a PR person for many, many years I've learned that body language in posed photos can be quite telling.
Look at the historic picture above of four Presidents and one about-to-be-President.
George W. Bush stands in the middle with his hands at his side. This is what we tell most public figures when they pose for a picture like this: Just stand with your hands at your side and smile. "W" is well-trained. He does what the pros tell him to do. He also remembers his mother's advice: Be friendly, be courteous, don't call unnecessary attention to yourself.
But Jimmy Carter stands apart from the others.
He won't allow his body to even brush up against Clinton's or the others. In his self-righteous mind he's better than the rest. He stands apart.
Bill Clinton has his hands behind his back. Need I say more?
And Obama seems friendly enough but his hands tell the tale. He has struck a classic "fig leaf" pose. Stuck between "W" and "HW" he's protecting the Crown Jewels.
Then there's HW. He's his jovial self: A jolly good fellow who's just along for the ride. But don't think his defenses are completely down. After all, he does seem to have his hands in his pockets. Well, maybe that's why he seems to be in such a good mood!
Posted by Dan Cirucci at 7:13 AM

Fabulous! You should replace the lady O'Reilly brings in as the body languare expert. Of course, I'm prejudice.

Notice Carter's suit is also a different shade than the rest. Could that be for the same reason as he stood apart from the others?

Also I'm intrigued by the different color ties. I thought red was standard?

It's funny that the two southerners (carter and Clinton) are wearing red ties while the Bushes and Obama go with blue. I know that W is a Texan but I don't really count Texas as part of the Old South. Texas is Texas -- it's an entity unto itself.
Also, the two one-term presidents are at the ends -- sort of as bookends for the group.
The two-term presidents stand front and center.
Interesting.